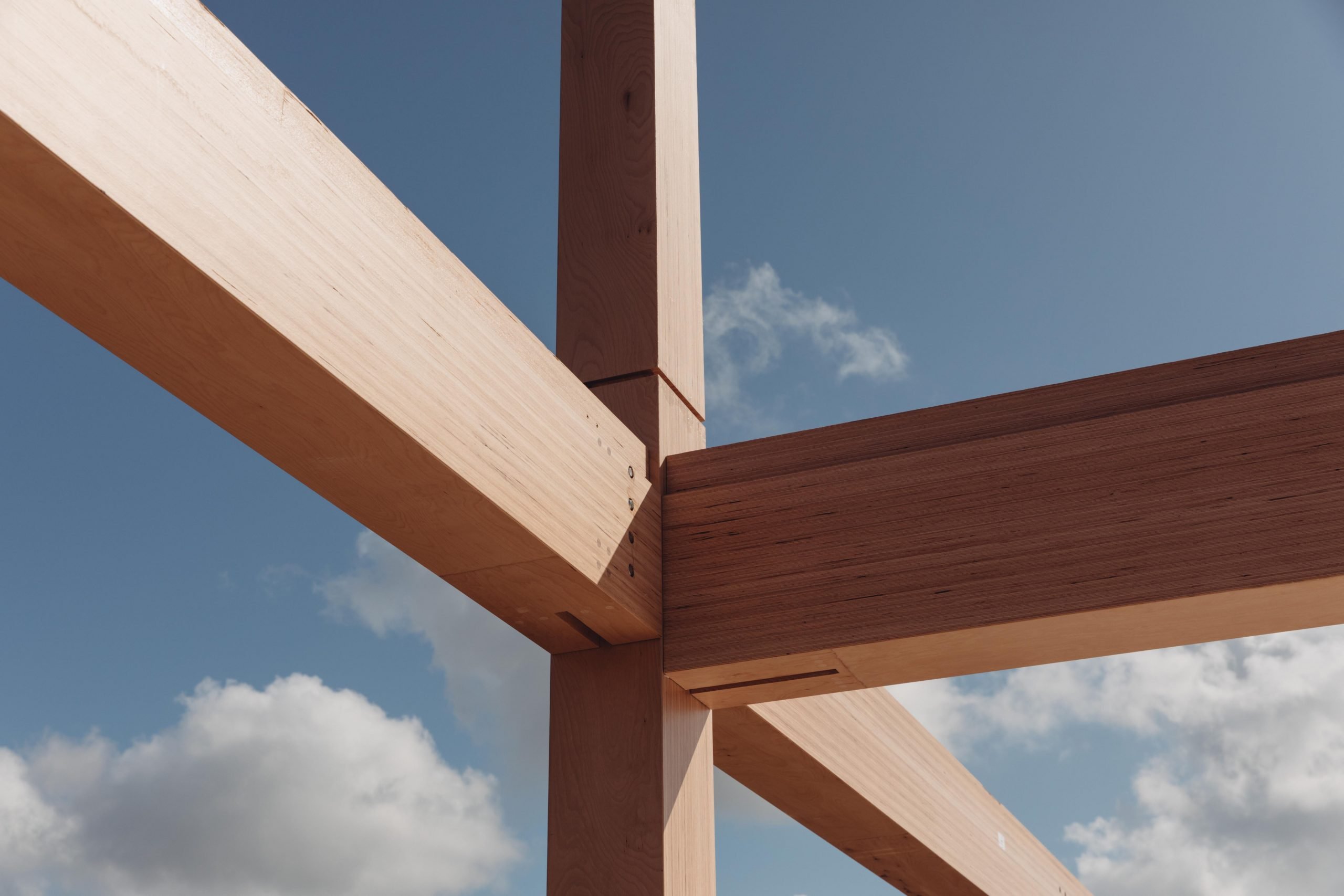 The Black & White Building is London’s tallest engineered-timber office building. It contains no concrete above the ground floor slab. Its frame uses timber to provide all the strength and adaptability of steel.

Standing 17.8m tall, the 6-storey Black & White Building is an ingenious example of timber construction. It shows what can happen when the whole team – client, architect and engineer – set themselves a challenge and unite to make it happen. The challenge here was to build an office space with built-in adaptability, one which allowed for future layout changes. And to do it all with engineered timber.

This is what The Office Group wanted to build at a site in Shoreditch, East London. Architects Waugh Thistleton, long-term collaborators with them, rose to the occasion.

“Open space allows a building to be more adaptable in the long term,” points out Andrew Waugh, Director and Co-Founder of Waugh Thistleton.

“But many buildings from the 1980s onwards are very difficult to adapt, they are cast in place. Timber can provide that internal adaptability: it’s a great low-carbon solution for an adaptable space.”

There are no structural internal partition walls in the Black & White building, so the workspaces are large and open. This leaves plenty of opportunity for future layout customization. But how was this open space achieved without the use of any supporting steel or concrete? 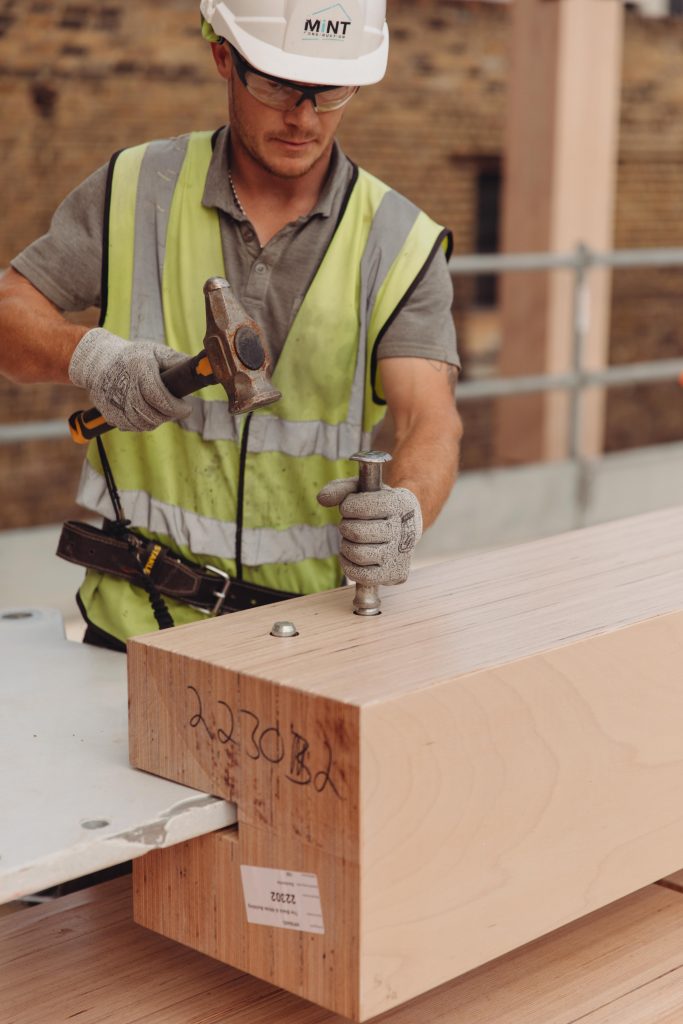 The building is a hybrid structure comprising a frame made of a beech-based laminated veneer lumber (LVL), with cross laminate timber (CLT) floor slabs and core. “It’s primarily the strength and stability of the LVL that gives us a structural frame with comparable strength to a steel one,” Waugh discloses. “The structure weighs 20 percent of a comparable concrete one.”

Beech is a very strong hardwood. Waugh points out that there is a lot of it: it’s the second-highest volume of species in Central Europe’s managed forests. “It is relatively fast-growing too. Unfortunately lots of it is burned for biomass.” The beech LVL frame takes all the gravitational load – all the weight – while the softwood CLT provides the shear capacity.

“It’s not what holds the building up but what holds it still that you really need to worry about,” Waugh advises. “Always think about wind load: that’s the important criterion: not the weight of the building but the shear forces against it. If you understand that and design structurally, then you can use less timber overall.”

In addition to the space gained by a lack of internal structural walls, further space was saved by services being inlaid into the LVL beams. “Where the beam meets the column you can carve into it,” he explains. “You can pass services through it.”

Toby Ronalds is Senior Engineer at Eckersley O’Callaghan, the structural and façade engineers on the project. They had, he explains, successfully made use of LVL’s structural strength in recent years for the award-winning UK headquarters of biotechnology company Promega. And for the headquarters of furniture manufacturers Vitsoe, at Leamington Spa.

“Many people in the UK are very familiar with CLT but in Europe it’s more about frame structures,” he reflects. “We do perhaps have some catching up to do in the UK – in understanding different species of timber, and the different ways of putting them together.”

Shading of the building was a challenge, as Waugh Thistleton had determined not to use tinted glass on the windows. “Glass with solar shading film can’t be recycled – it goes to landfill,” Waugh explains. “And people prefer naturally daylit spaces. This meant that the solar shading had to be external.” A parametric model was designed, to understand the solar path across building over different seasons. This would determine how frequently solar shades would need to be positioned, and at what angle.

“On the south of the building we have horizontal shades; and vertical on the north and west. Don’t put vertical window shades on a southern façade – it’s a mistake often made on buildings.”
The solar fins that provide the shading are made of thermally modified tulipwood. This was used for several reasons. For one thing, the American Hardwood Export Council (AHEC) were very helpful and informative when Waugh Thistleton were looking to specify. AHEC provided detailed information about the husbandry of their forests and life-cycle analysis of the wood.

For another, tulipwood is plentiful. Tulipwood trees are liable to blow over in strong winds. Due to climate change, strong wind events have become more common in the US, leading to high availability of tulipwood. “It’s a beautiful stable hardwood. Instead of it being pulped for cardboard, you can get 70 years’ use from it by thermally modifying it for timber construction.” 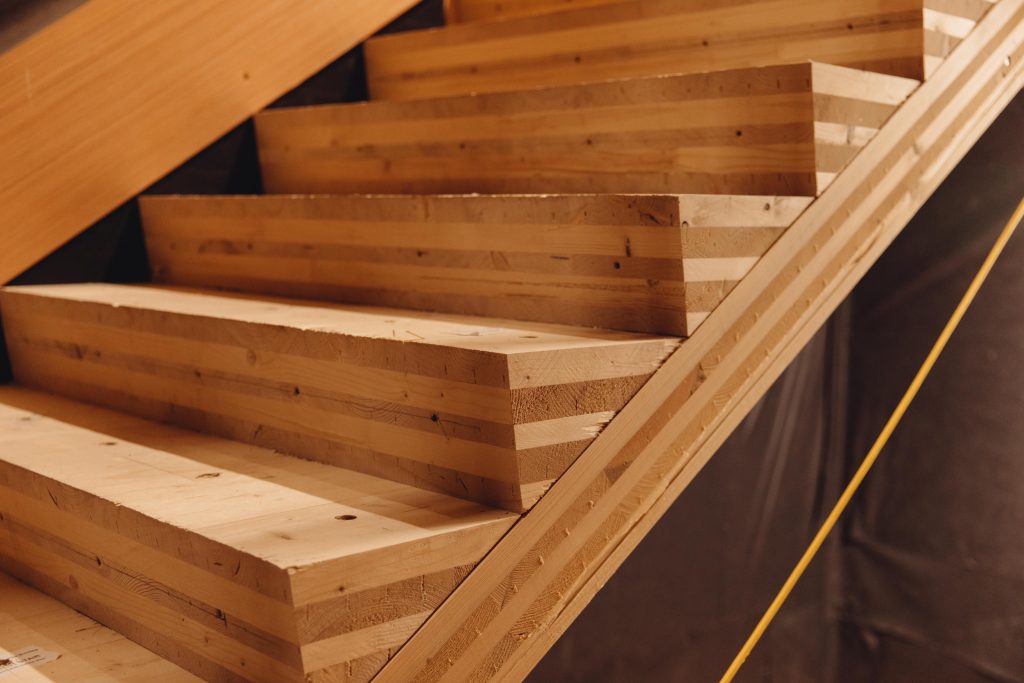 Image © The Office Group. The building is a great showcase for timber throughout its internal spaces

A public showcase of timber

“Timber mullions – rather than aluminium – hold up glass panels which are integral to the building,” points out Toby Ronalds. “There’s further carbon saved there. The whole building gives off an overall ‘timber vibe’. In that respect it’s a striking building.” Andrew Waugh gives a great deal of credit to clients The Office Group on that front. They had always wanted the building to be timber. They understand, he believes, that sustainability in construction must go further than just adding solar panels.

“It’s about a different approach to architecture,” he concludes. “It’s about understanding what the material can do – it’s structurally led design.”

CLTIssue #1LVLStructural timberTimber Strength
Latest news
What is Timber Development UK? And how can it help the timber sector?
A positive market outlook – despite reduced growth