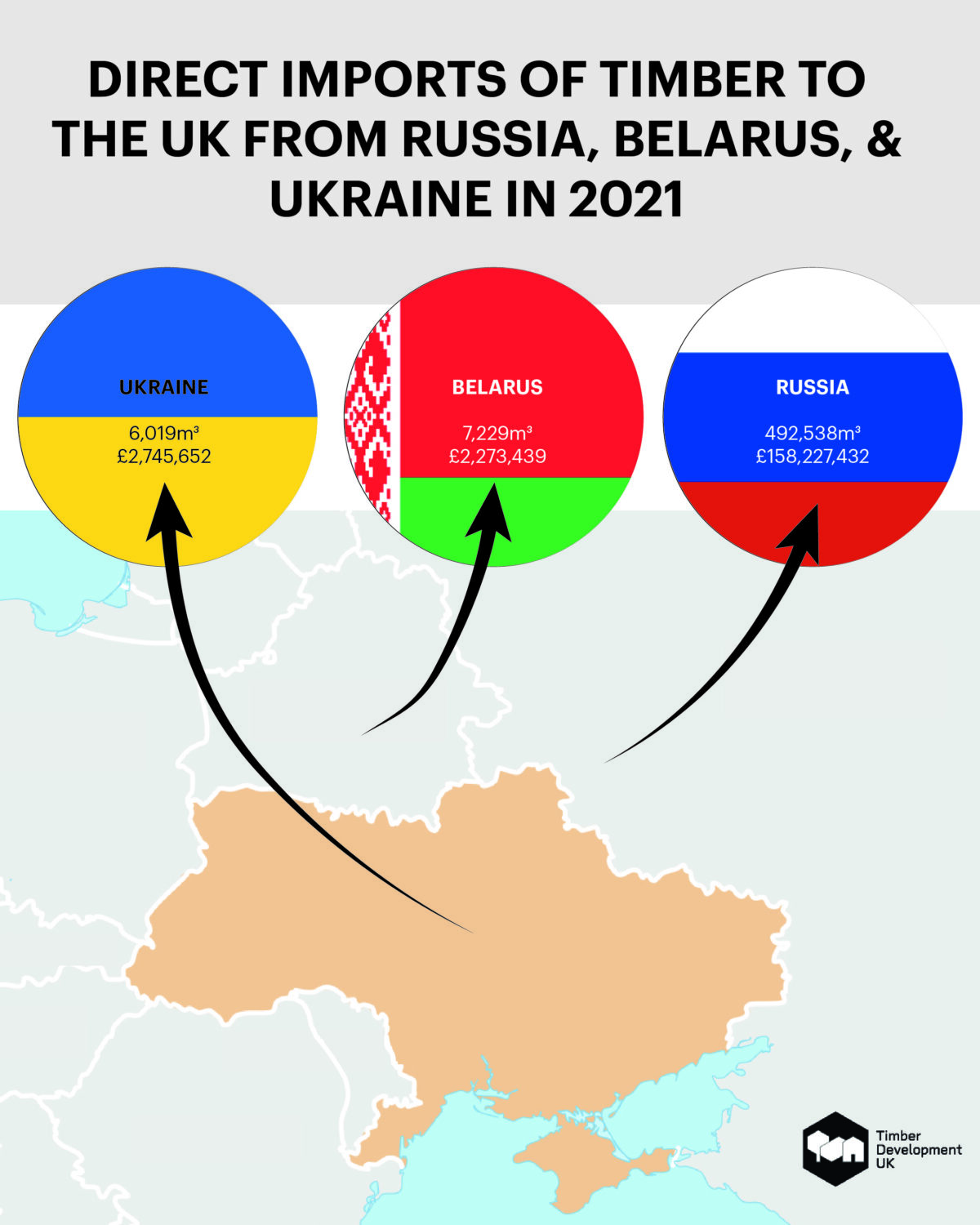 With an illegal invasion of Ukraine ongoing, Timber Development UK is advising all members to cease trade with Russia and Belarus.

The war in Ukraine has rightly focused hearts and minds over the past two weeks, as people all over the world look for ways to express solidarity with and support for the people of Ukraine. From a political view, one of the chief tools to do this has been via trade sanctions against Russia and Belarus. These have been swift and wide ranging.

The financial sanctions from multiple Governments to exclude many Russian banks from the international SWIFT payment system has effectively shut a lot of firms out of international trade as payments cannot be made or received; the UK Government has requested British ports to refuse entry for Russian owned or registered vessels; the EU has imposed trade sanctions on Belarus covering multiple commodities including timber; and the US Govt is considering a trade embargo on Russian oil exports.

All of these sanctions are already affecting the trade in timber and timber products. Indeed, many members have already released statements that they are ceasing trade with Belarus and Russia, and, most recently, PEFC stated that they are reclassifying Russian and Belarussian products as Conflict Timber and thus ineligible for certification.

In line with these sanctions, and in support of the positions taken by members already, we are now advising all members of Timber Development UK to cease trading with Russia and Belarus if they have not done so already.

We do of course realise that for some this will not be easy. But, right now the risks, financially and reputationally, are extremely high. NGOs are already calling for a total ban on timber trade with the two countries and many firms will not want conflict timber in their inventories or buildings.

This week I chaired a meeting for members of the European Sawmilling Organisation (EOS) and CEI Bois, the main European organization for the timber and woodworking industries. In it there was unanimous support for the trade sanctions against Belarus and an expectation that these would soon be matched by equal measures against Russia.

This will of course cause huge disruption to timber supplies into Europe and to the UK market. While direct imports into the UK are relatively small, Russia and Belarus account for about 10% of the softwood market in Europe. Removing this will make the available supply even tighter, causing potential shortages in some product areas.

Today we have released a trade note for our members looking into the impacts we expect in the UK. We will update this as the situation develops.

A debate in the European industry meeting this week concerned mitigation and support measures that the industry could ask for from the Commission and national governments to alleviate the shortages expected. This debate is ongoing. But, one thing is for sure: we cannot ask for support unless we are also prepared to make some small sacrifice ourselves.

Ceasing trade during an illegal invasion seems a small price to pay compared to the horrors being experienced by the Ukrainian people.