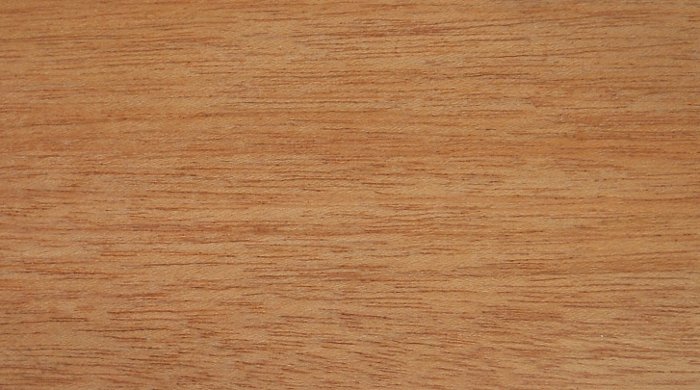 The TreeAgba is one of the largest trees of West Africa where it is found in the rain forests. The trunk is cylindrical and free from buttresses; in fact, sometimes the trunk has the appearance of a round log set on end, with no root swelling at the base. The tree is extremely tall and often clear of branches to over 30m, the diameter frequently being 1.5m to 2m. The bark is thin, greyish, smooth and often showing spiral twisting. If the trunk is wounded or notched, thick gum or oleo-resin exudes which hardens to large lumps. There is considerable variation in respect of gum, some logs being practically free while others contain large quantities.

The TimberThere is little difference in colour between the sapwood and the heartwood, the latter is slightly darker but the line of demarcation is somewhat indefinite. The wood varies from yellowish-pink to reddish brown (like a light coloured mahogany). Generally, it strongly resembles mahogany in grain etc. but is less lustrous and paler in colour. The texture is fine and the timber is fairly hard. Particularly when freshly cut the surfaces tend to be gummy. The weight is about 510 kg/m3 when dried.

DryingThe timber can be dried fairly rapidly with very little tendency to warp or split. Some gum exudation is likely to occur, especially in pieces containing the pith, and for this reason, very high temperatures should be avoided.

StrengthAgba is highly resistant to crushing strains; it compares favourably with Honduras mahogany, being about half as tough again and equal in crushing strength, though somewhat less stiff. Brittleheart is often extensive, particularly in large logs. The affected timber is considerably weaker than normal wood, and careful selection is necessary where strength is a requirement.

Working QualitiesGood - Agba is easy to work with most hand and machine tools; sometimes there is a slight tendency for saws to stick owing to the gumminess of the wood. An excellent finish can be obtained and the wood has good nailing, screwing and gluing properties. It produces good veneer by slicing, but the logs should not be steamed, or the veneer dried under high temperature, because the wood will gum under these conditions. Generally, agba is similar to Honduras mahogany in working qualities, but usually milder to work. It takes stain and polish well.