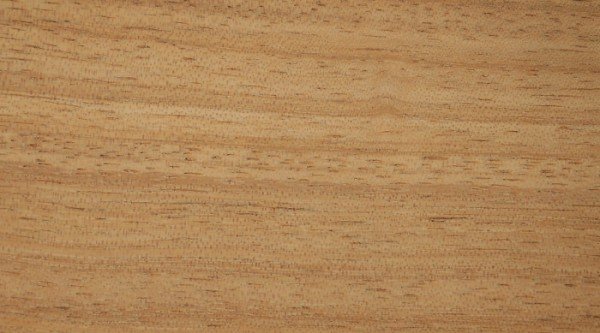 The TreeA large tree usually 36m or more high, but the large, spreading, plank buttresses reduce the usable bole to something like 10m to 15m with a diameter of 1.0m or slightly more. The bole is usually straight and cylindrical.

The TimberSapwood is whitish to greyish-red, sharply defined from the heartwood which is light to golden-brown, very similar in appearance to iroko. A ribbon grain produces zones of light and dark colour. The texture is coarse and woolly, but uniform.

DryingRather difficult to dry, but variable in this respect. Dries slowly, and there is a tendency to distort, and a liability to collapse in some thick material.

StrengthThe strength values are good, resembling those of iroko, but because of interlocking grain it is not suitable for use in small sections where strength in bending is a prime requirement.

Working QualitiesMedium - Works fairly well but with appreciable dulling effect on tools. There is a tendency to pick up in planing, and a cutting angle of 100 is recommended. Takes a good finish and may be screwed and nailed, with only a slight tendency to split when nailed near the edges.