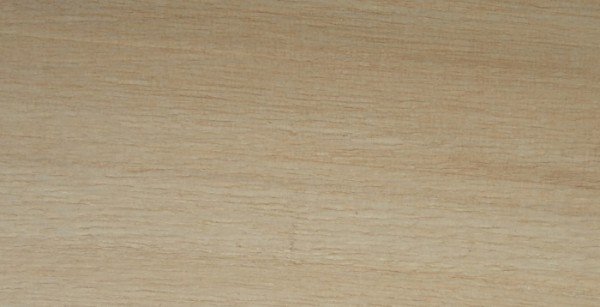 The TreeWith the exception of the white poplar and aspen, the trees reach a height of 30m; the two former species seldom exceeding 18m. The diameter of all types is around 1 m.

The TimberPoplar timber can be grouped with willow, lime and horse chestnut, since they are all soft, fine-textured woods, generally without lustre and without any very characteristic colour. Poplar wood is whitish or greyish in colour generally, but may be light brown, with no clear distinction between sapwood and heartwood. It is usually straight grained, without odour, uniform in appearance, rather woolly to the touch, and light in weight, the various species weighing about 450 kg/m3 when dried, although the grey poplar is usually a little heavier at 480 kg/m3. Commercially, the general quality of poplar reaching the market varies considerably according to the area of production, and the degree by which the many species and their hybrid forms are mixed. Well-grown aspen is usually of particularly good quality, especially from northern Europe, but the wood of the white and grey poplars is generally of relatively low quality, with a very wide, whitish sapwood and a reddish-brown heart-wood. Much of the poplar from France and Belgium is generally composed of timber of the black poplar group.

DryingDries rapidly and fairly well, with a tendency to retain local pockets of moisture, and for knots to split.

StrengthFor their weight, poplar timbers are relatively strong and tough, and in the dried state, and depending on type, are only about 15 to 30 per cent inferior to European oak in all strength properties except hardness and shear, where they are about 50 per cent inferior.

Working QualitiesMedium - Black Italian poplar is reputed to have the best working properties, and white and grey poplars the worst, tending to bind on the saw, and to produce a woolly surface. All types, with the exception of aspen, are slightly tough in working, aspen comparing more closely to lime in this respect. A good finish is obtainable with all species however, if thin, sharp-edged tools are employed. They can be glued satisfactorily, and take paint, polish and varnish quite well, but while they can be stained the wood accepts the stain with patchy results.