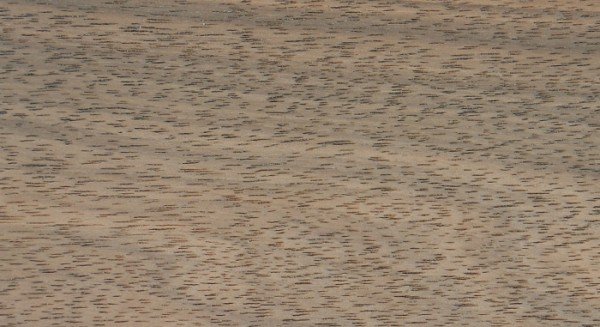 The TreeIt attains a height of 24m to 30m and a diameter of about 1m or a little more, with a rugged bole rarely exceeding 6m in length.

The TimberWalnut timber varies very considerably in colour; the sapwood is a pale straw colour, clearly defined from the heartwood which is greyish or greyish-brown, but infiltrations of colouring matter produce a darker-coloured streaky figure to the wood some- times irregularly distributed throughout the heartwood at other times being concentrated in a relatively small core of inner heartwood. The darker streaks are usually of a smokey-brown or reddish-brown colour, the decorative appeal often being accentuated by natural wavy grain.Local growth characteristics tend to vary the appearance of wood coming from certain areas, thus Italian walnut tends to show darker, and more elaborate markings than in walnut from France and Turkey, which are basically paler and greyer in colour, and in turn, paler than English walnut. Burrs, crotches and stumps provide valuable material for highly decorative veneer, and a good walnut tree should always be grubbed out and never sawn down above soil level, stumps often producing beautifully mottled wood. The texture of walnut is rather coarse, the grain usually wavy and the wood weighs about 670 kg/m3 when dried.While it is not possible to apply hard and fast rules to the type of walnut produced in a given country, the following is a rough guide to the overall characteristics.French walnut; probably the largest class used. Usually rather lighter and more grey in colour than English.Italian walnut; considered more valuable than French being generally well figured and of a good colour. The best qualities used to come from Ancona, and the terms Italian and Ancona are now often used to denote any well-figured dark and streaky walnut.English walnut; lies between French and Italian in decorative appeal, but is often superior to both. Heavy cutting in the past has greatly reduced the availability.Circassian walnut; represents the better-quality timber from the Caucasus; considerable amounts used to be exported but little has been seen on the UK market in recent years.Spanish walnut; the timber resembles French walnut but is generally smaller, and of poorer quality.

DryingDries well, but slowly. There is a tendency for honeycomb checks to develop in thick material if the drying is forced.

StrengthA fairly hard to tough wood with a relatively high resistance to splitting.

Working QualitiesGood - Works easily and well with both hand and machine tools. It is suitable for hand carving and for turnery, finishing cleanly from the tool. It can be glued satisfactorily, and takes an excellent polish.