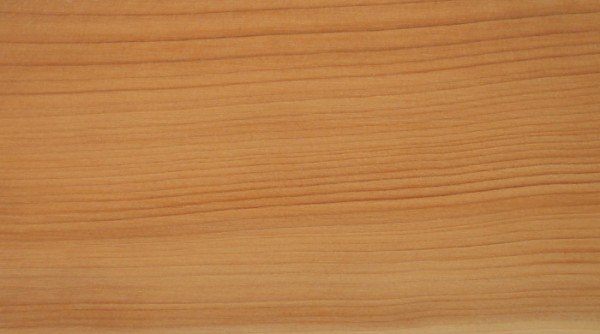 The TreeAlthough a large tree it is by no means tall, growing to a height of 12m to 15m but with a short bole which is never cylindrical because of its characteristic form of growth. The tree is continually pushing out new shoots from the lower part of the bole; these grow upwards and coalesce with the old wood thus producing a fluted appearance to the bole, or as a series of' fused stems.

The TimberThe sapwood is very narrow and white in colour sharply demarcated from the heartwood which varies in colour from orange-brown to dark purplish-brown, the lighter-coloured wood often containing darker streaks. Although the natural growth tendency is to produce narrow growth rings which account for the hard, compact, and elastic nature of yew wood the irregular growth pattern results in widely varying ring widths even in the same ring, and this, combined with the narrow zone widths of dense late-wood, often produces a valuable decorative appearance in the wood. It is a hard, relatively heavy softwood weighing about 670 kg/m3 when dried.

DryingThe timber dries fairly rapidly and well, with little degrade but care is needed initially to avoid shakes developing Where these occur in air drying, they usually tend to extend in further drying.

StrengthA tough, resilient wood, equal to oak in hardness and in compressive strength along the grain, but rather inferior to oak in resistance to splitting.

Working QualitiesDifficult - A moderately difficult to difficult timber to work and machine, depending greatly on the type of grain present; when this is straight, the wood can be machined and finished to a good surface, but irregular and cross-grain can tear out in planing and moulding, and a reduced cutting angle is recommended, generally to about 15:. The wood is inclined to be oily, which sometimes interferes with good gluing, and care is therefore needed. It takes stains satisfactorily. and a high polish. It is a good turnery wood.