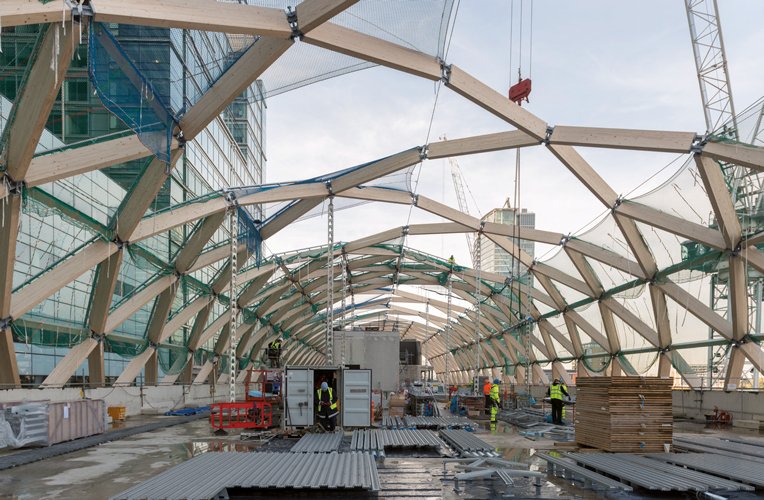 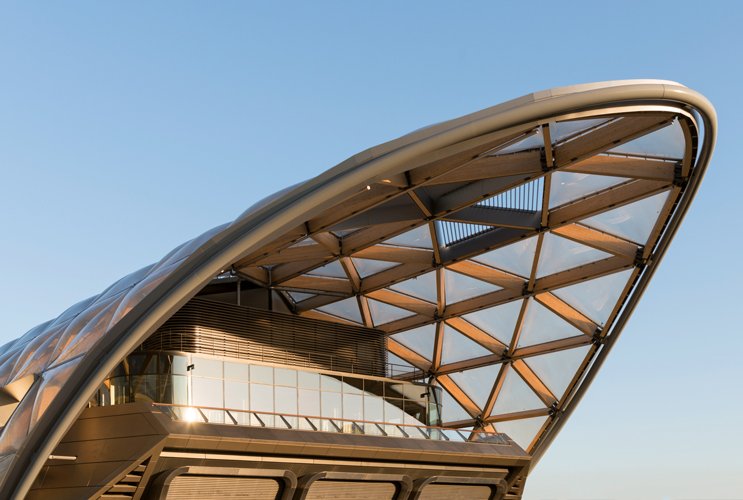 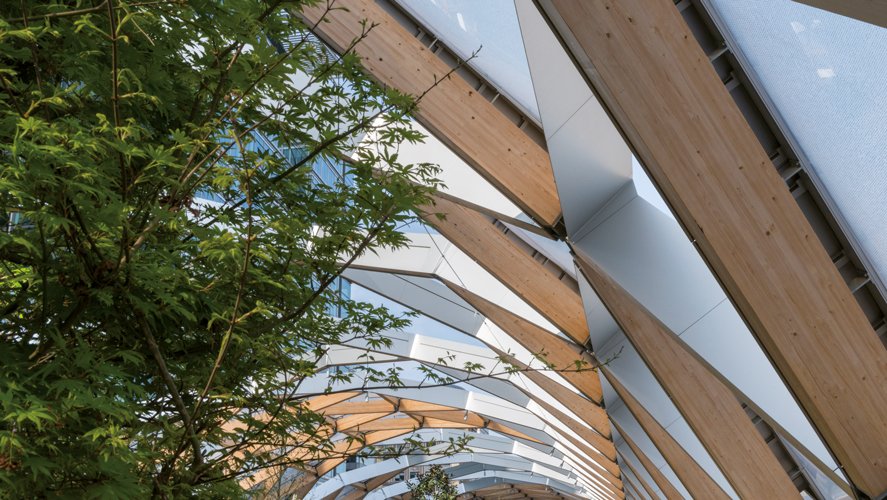 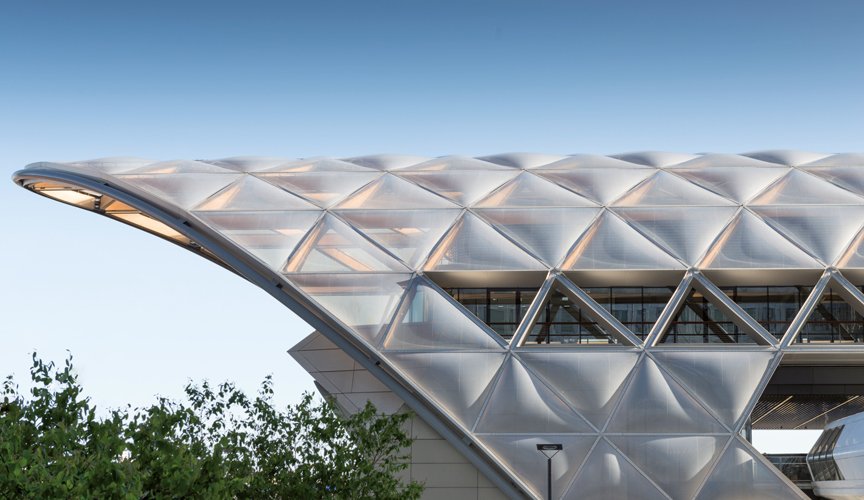 As part of a collaborative design project, Foster + Partners designed the roof and external facades of the overground structure, including the retail facades. The structure is unified by a timber diagrid roof which curves around the building like a protective shell. 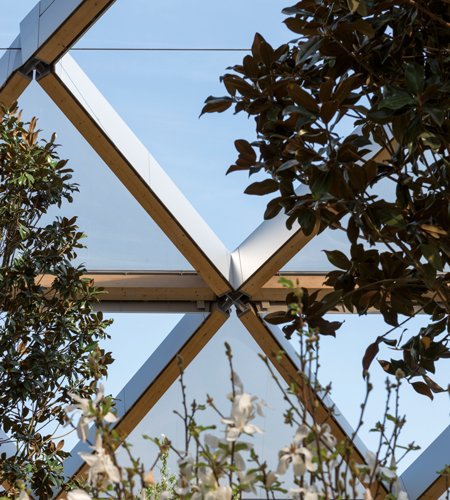 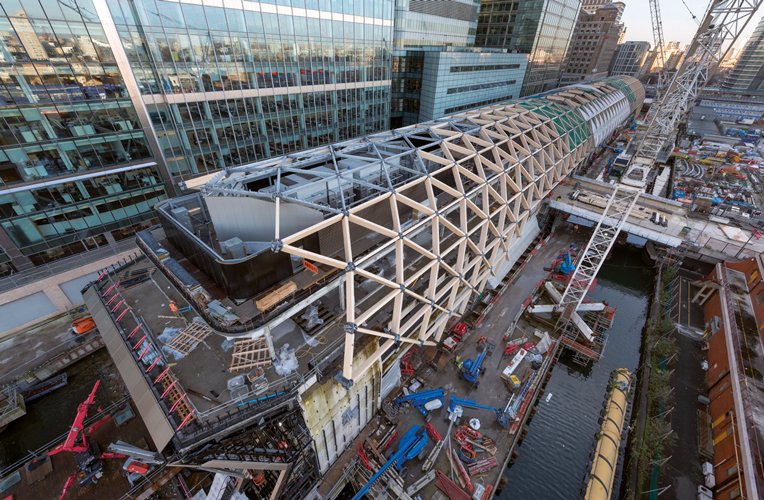 Crossrail is the largest transport project in Europe, connecting London from east to west with nine new stations and 42 kilometres of new tunnels under the city. While the Canary Wharf Crossrail Station will be operational only in 2018, the overground structure, including four levels of retail and a landscaped roof park has been open to the public since May this year. As part of a collaborative design project, Foster + Partners designed the roof and external facades of the overground structure, including the retail facades. The structure is unified by a timber diagrid roof which curves around the building like a protective shell. At 310 metres long, with dramatic arches cantilevering 30 metres over water at each end, it is one of the longest continuous timber roofs in the world.

The glass and steel office towers of Canary Wharf stand amidst docks and waterways where sailing ships once unloaded their cargoes. The timber roof is clad with translucent ETFE cushions, acting as a counterpoint to the steel and glass towers of the offices nearby.

Studies showed that the only suitable position for the station building was in the waters of the north dock. Before work started on the building, the dock had to be drained of 100,000 cubic metres of water and excavated 30 metres below dock bed level to cast the Crossrail track bed. An innovative piling technique was developed by Arup to form the perimeter walls and a concrete superstructure was then built to house the station level and four higher levels of retail units with a public landscaped park on the top floor. The Crossrail station lies below the water level and only two floors of retail and the public park are now visible, linked to the dock edges by bridges. The retail floors, just opened, include shops, cafés, cinema, health centre and other amenities, and have built-in flexibility, with double-height entrances, to accommodate changing needs.

The diagrid roof, clad with translucent air-filled ETFE (ethylene tetrafluoroethylene) cushions, arches over the landscaped park and curves downward at the sides to partly enclose the retail levels. When open at night, the park will be lit, illuminating the timber lattice from below and creating a welcoming glow through its translucent ETFE outer skin.

The rooftop park paths meander through 4,000 square metres of landscaped gardens, including full-sized trees, with publicly accessible amenities at each end. Along the upper parts of the diagrid, the ETFE cushions have been omitted to leave openings for natural light and rain for natural irrigation. This helps to create a unique microclimate for the park below, allowing the gardens to be planted with some of the species that first entered Britain through the same docks. Additional openings along the sides and at the ends of the diagrid give views of the water and surrounding streets.

Timber was the natural choice for the diagrid structure, not only for its traditional relationship to the nautical history of the wharf but also for its combination of strength and adaptability. The use of timber helped to fulfill the client’s requirement for a sustainable building; the spruce glulam beams are sustainably sourced. Above all, timber could be economically and efficiently machined to follow the complex geometry of the curving forms.

The glulam grid shell roof is lighter than an equivalent steel structure and the ETFE roof weighs a fraction of a glass alternative, so design of the main steel and concrete structure below benefited from the reduced weight.

Because of the size of the roof and its complexity, the two fabricators – the glulam specialist Wiehag, and the EFTE cladding manufacturer se-austria – worked together from the start of the project to tender the roof as a single package. At first sight the geometry of the diagrid appears simple, but it is a simplicity achieved by rigorous analysis of the complex structural form and the constraints of the materials used. Foster+Partners used a parametric modelling system to define the overall geometry and the fabricators adopted the same approach to co-ordinate design and detailing and to integrate both glulam beams and ETFE cladding systems.

The diagrid is a series of triangles formed of glulam beams connected by steel nodes; the ends of six beams meet at each node. Over the central section of the roof, the relationship between node and beam end is similar, but as the triangles gradually increase in size towards the arched cantilevers, the beams become longer and the angles at which they connect to the nodes become more acute and asymmetric. The design of each node varies according to the angle. To add to the complexity, the open parts of the roof directly over the planting have larger diamond-shaped openings which meant that two, three, four, five or six beams connect at nodes. Because the nodes are all designed as a family, all the variations are designed within the system, resulting in over 300 different node types.

The structural analysis of the diagrid was challenging, explains Clemens Huber of Wiehag: “For this structure with multiple degrees of indeterminacy, the stiffness of each element, especially of connection elements, influenced how the loads were distributed. If the stiffness is increased at one location, it attracts higher forces and simultaneously neighbouring areas will see reduced forces. The stiffer an element is, the more load it attracts and the more the connection element has to be reinforced. It is a dynamic process to reach a resolved model where everything is in balance with the right stiffness determined at each point, a process demanding many iterative loops.

For the timber screws that connect the timber beams to the steel nodes, determining stiffness parameters was an equally exacting process. The screw plates are loaded in all directions. In addition to the major axial forces (tension and compression), there are bending moments in all directions in major and minor axes and also torsion moments and shear in all directions. The timber has to support the forces created by the ETFE cushions, which create horizontal forces due to internal pressure. Furthermore, if a timber supports only one cushion, the offset horizontal loads generate torsion moments in the timber beams. The stiffness of the bearing structure also has an influence on the design of the roof element”.

The total number of timber elements is close to 1500 and each end meets a connecting node. For each of these 3000 connections, twelve different load combinations had to be considered. The structure was analysed and designed using structural analysis software Rstab plus Excel. This process was linked to the Weihag factory in northern Austria. The final output included everything from timber quality, strength and dimensions to how and when it was to be transported to site. At the Weihag factory the glulam beams were planed, glued and pressed in a fully automated process. A five-axis CNC (computer numerical control) robot was used to cut the beams to length and to machine holes and grooves as required. Four of the beams were curved and their curvature was also digitally controlled. Where they are exposed to the weather, the glulam beams are protected with anodised aluminium sheet cladding.

The inflated EFTE cushions which clad the roof triangles vary in size to match the diagrid members and at the cantilevered ends of the building they are over 7.3m – the maximum width possible given the forces exerted on the cushion (wind, snow and potential pounding etc.) The cushion edges are secured by aluminium extrusions to a series of support brackets (incorporating the air flow pipes) which are fixed above the glulam beams. se-austria designed and tested new cover gaskets and cover plates for the extrusions to ensure that they would be water-tight whatever the orientation. The computational process was also applied to the process of fabrication of extrusions, brackets and ETFE cushions.