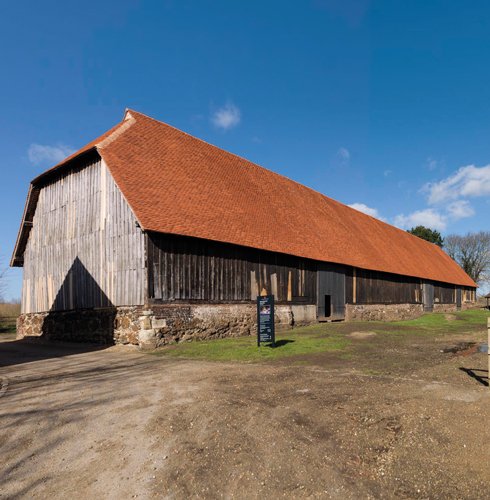 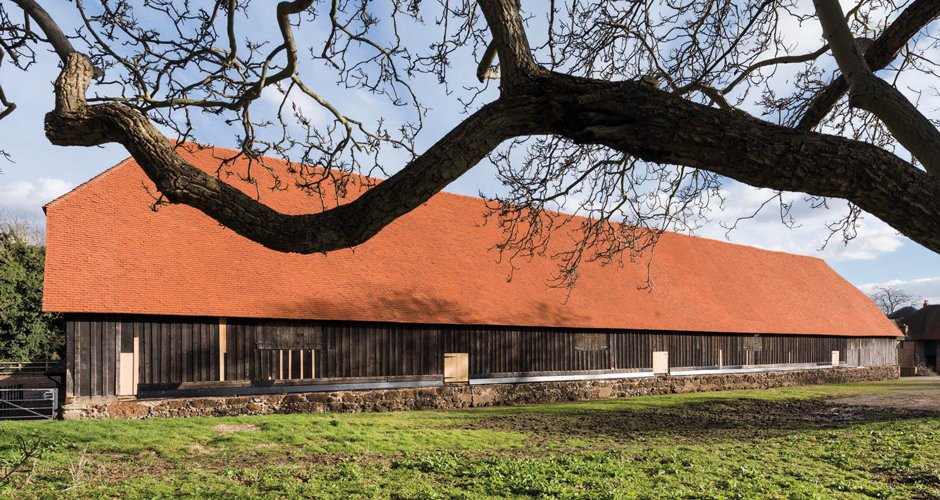 The Great Barn at Harmondsworth is the largest timber-framed medieval building in the country and one of the few surviving:
a magnificent and remarkably preserved Grade I-listed building which is nearly a thousand years old. 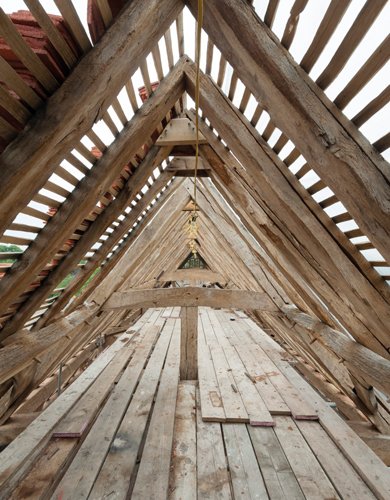 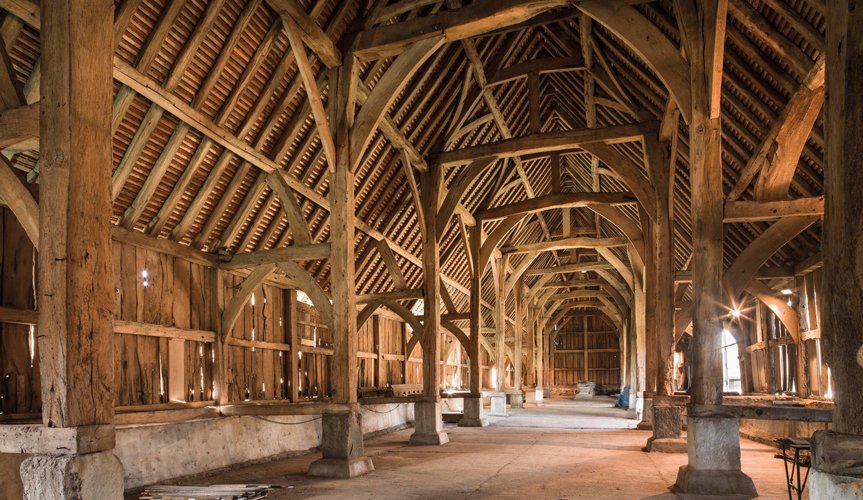 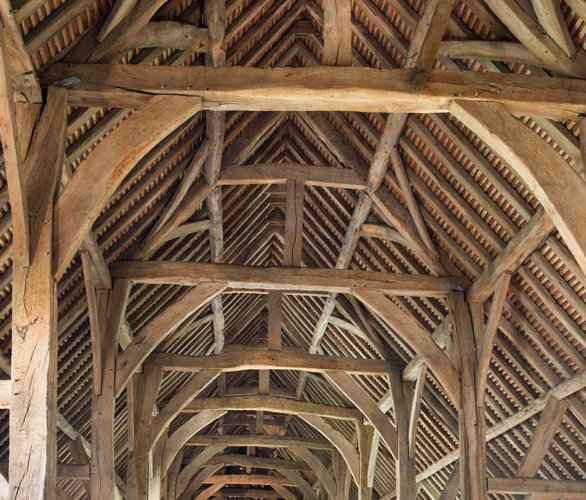 The Great Barn at Harmondsworth is the largest timber-framed medieval building in the country and one of the few surviving: a magnificent and remarkably preserved Grade I-listed building which is nearly a thousand years old. The oak structure and oak weatherboarding is an outstanding example of medieval carpentry and the barn itself is nationally significant for its prodigious and almost unequalled scale and its historical importance. John Betjeman called Harmondsworth Barn the Cathedral of Middlesex, possibly because the dramatic interior structure looks remarkably like the nave of a vast church. It is nearly 60 metres long, 11.4 metres wide, and over 11 metres high, its roof supported by 13 massive oak trusses which rest on raised stone plinths. The timber and masonry carry original carpenter and mason marks and the medieval workmanship is of the highest quality. The barn was built between 1425 and 1427 on land bought by the Bishop of Winchester to endow the school, Winchester College, and it stored grain – wheat, barley and oats – which was sold to pay for the school. It remained a grain store, attached to the adjacent manor farm, for many years, but by the 1970s both the farm and the barn had become derelict. A fire in 1972 destroyed the south elevation, yet the ancient oak structure remained remarkably intact. Various repairs, including underpinning to the medieval plinth, were undertaken in the 1980s. By the 2000s both barn and village were hemmed in by Heathrow Airport, the M4 and the urban development of outer London. In 2011 the Barn was bought for a token sum by English Heritage and since then has undergone a meticulous programme of conservation and repair by Ptolemy Dean Architects, based on surveys of its condition, structural feasibility appraisal and report by English Heritage. The repairs to the barn also gave an opportunity to train an apprentice in heritage carpentry and to allow experienced carpenters to sharpen their skills. The restoration aims to give the public an opportunity to appreciate the beauty of this medieval timber-framed building and the technology, method and sequence of its construction, together with the craft skills used in its restoration and repair. Harmondsworth Barn is now open to the public and is supported by an enthusiastic friends organisation. A different threat to its future well-being is the possibility of a third runway at Heathrow Airport, which would end only 150 metres away, leaving the barn intact but in degraded surroundings. The overall repair strategy was to make honest repairs, avoid intrusion and the loss of important historic fabric, while understanding the qualities of this unique building. The barn was roofed with clay tiles, some of which were 200 years old. Many were missing, chipped and starting to fail and a survey suggested that only 20 per cent of the most historic tiles could be re-used. The whole roof was re-covered with hand-made red clay tiles fixed with oak pegs. They rest on traditional riven oak laths nailed to the rafters with nonferrous fixings. To maintain natural ventilation throughout the interior, a roof membrane was not used. The barn consists of thirteen oak frames, raised off the ground on a continuous metre high ferricrete (iron oxide-cemented gravel) plinth. The frames are jointed together with four purlins running along each pitch. Rafters span between the purlins and rise above them to form the ridge. At each end of the barn is a small hipped gable truss. Each frame consists of two arcade posts with a king post truss spanning between them up to ridge level, two wall posts on the perimeter and a principal rafter spanning between the wall and arcade post. The wall post is tied back to the arcade post with a timber tie beam. The frame is braced with struts and braces. In the 1980s the king post truss roof structure was repaired and rotten timber sections replaced with green oak, together with diagonal timber struts to support the upper nave purlins which had sagged and shortened, at places pulling apart their mortice and tenon joints. Other earlier repairs had included traditional iron straps where the aisle posts had split at their heads. Although such repairs were appropriate for what was then a farm building, Harmondsworth is no longer so. As the architect explains: A black and white agricultural or functional approach is tempered by needing to respond to the desire and opportunity to allow this noble structure to be restored to its original structural form and to be left free of later timber props. The diagonal struts had always been intended to be a temporary measure. And once the roof tiles were removed, a unique opportunity arose to repair the roof structure from above. The purlins have been stiffened with top surface-mounted non-ferrous plates inserted through their centres. This allowed the struts to be removed and the barn to be restored to its original structural appearance.