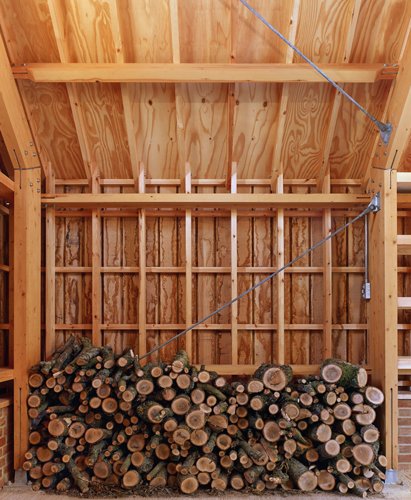 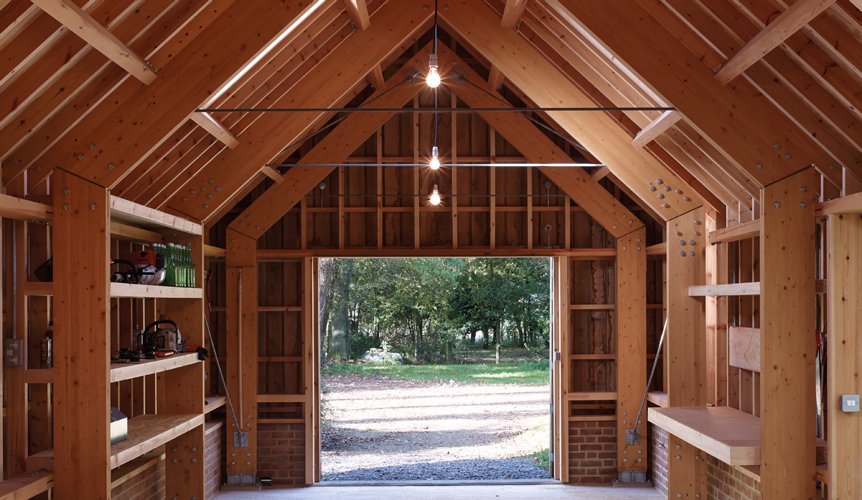 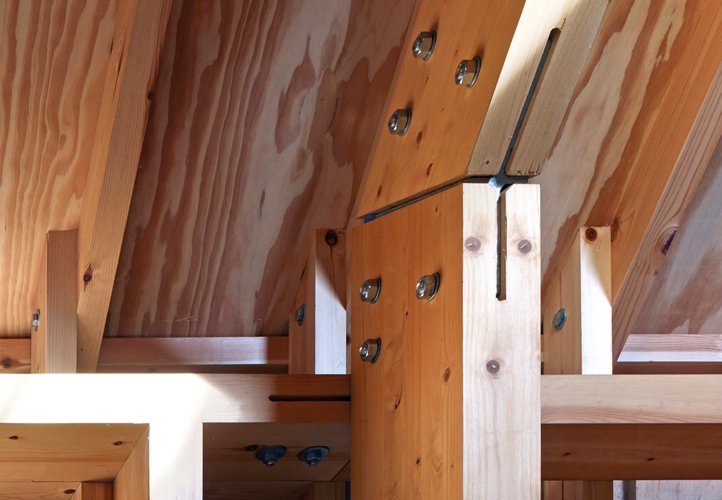 Set at the end of a long rural track in Hampshire, Long Sutton Studio is a building which celebrates timber in its many forms: softwood and hardwood, laminated, planed and rough sawn. Timber is the predominant material, used for both structure and cladding, and its different forms give texture, identity and character to the building. Although Long Sutton Studio might appear to be a very traditional timber building at first glance, a closer look reveals a contemporary approach to structure, form and detailing. The client, Tom Lloyd is a product designer and the site is in the grounds of his home, a former farmhouse in Hampshire. He wanted a building that could fulfill a series of basic functions: studio, workshop, garage or storeroom. It was also an opportunity to combine architecture and timber craftsmanship to create a simple yet beautiful studio that would enhance the rural setting of his house. Tom obtained outline planning permission and was closely involved in all aspects of the design with the architect Cassion Castle Architects and the structural engineer Structure Workshop. Long Sutton Studio replaces a concrete garage and timber shed, both of which were in a poor state of repair. A key objective was to replace these with a single building that was more sympathetic to the main house in its design and choice of materials. The new studio is deliberately understated; its traditional pitched roof form suggests that it might have stood there for many years, blending inconspicuously among nearby vernacular buildings, but close inspection reveals the modern detailing which gives it a subtle and contemporary identity. Externally, the studio is an assembly of traditional materials – green oak, red brick, reclaimed roof tiles – reflecting those used on the main house. In contrast, the interior of the studio is a lofty single-volume space with all the timber elements clearly expressed and visible. The primary structure is a series of six portal frames, of glulam members connected by exposed galvanised steel plates and fixings. With the use of stiff joints, the glulam frames create an interior which is open up to the ridge, crossed only by delicate steel tension cables. Spaces created within the depth of the walls are used as workspaces, shelving and storage. Objects placed here, such as a log pile or piece of wooden furniture, take on sculptural characteristics themselves and extend the celebratory use of timber. Long Sutton Studio is completely accessible to all building users. Because it is illuminated almost entirely by natural light and has no heating, its carbon footprint is negligible. The walls are clad with vertical boards of rough sawn green oak weatherboarding set on a red brick plinth. The pitched roof is sheathed in plywood and laid with reclaimed tiles. Natural light is admitted through roof lights set in the slope of the roof, avoiding the need for windows in the main elevations which would have interrupted the strong rhythm of the weatherboarding. Two sets of large oak-clad double doors open up to admit further light when weather permits. The cladding is board-on-board green oak fixed to chamfered, 50mm deep treated softwood counter battens. The boards are visible from inside the building – there was no requirement for insulation. The oak was sourced from a sawmill not far from the site, where it was sawn to wider 145mm x 22m boards and narrower 60 x 22mm boards, delivered to site green. Given the risk of movement, cupping and shrinkage of the green oak, the architects consulted TRADA on the application of the cladding. We consulted TRADA on fixing methods, overlap and orientation of the vertical board-on-board cladding. We used the wider board on the inside, heartwood-in, with a 20mm gap between; externally we used the narrower boards, heartwood-out, which covers the gap with a 20mm overlap of the wider board either side. TRADA also gave advice on the number and spacing of the stainless steel fixings, how much movement could be expected in the oak and the likelihood of boards splitting with single or multiple fixings per plank. TRADA’s experience helped us to understand the material characteristics to a greater degree, and confidently specify the correct fixing methods for the application.