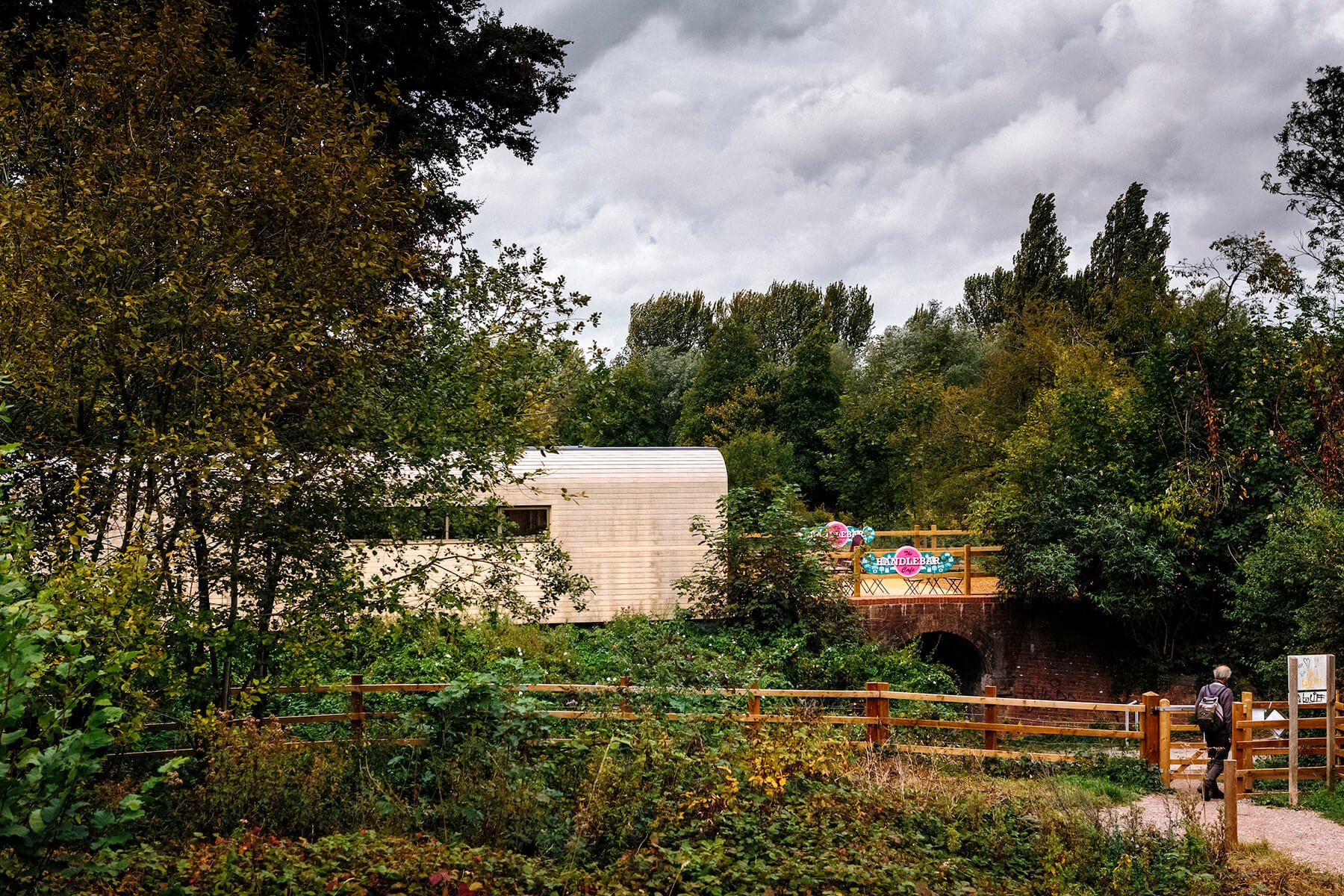 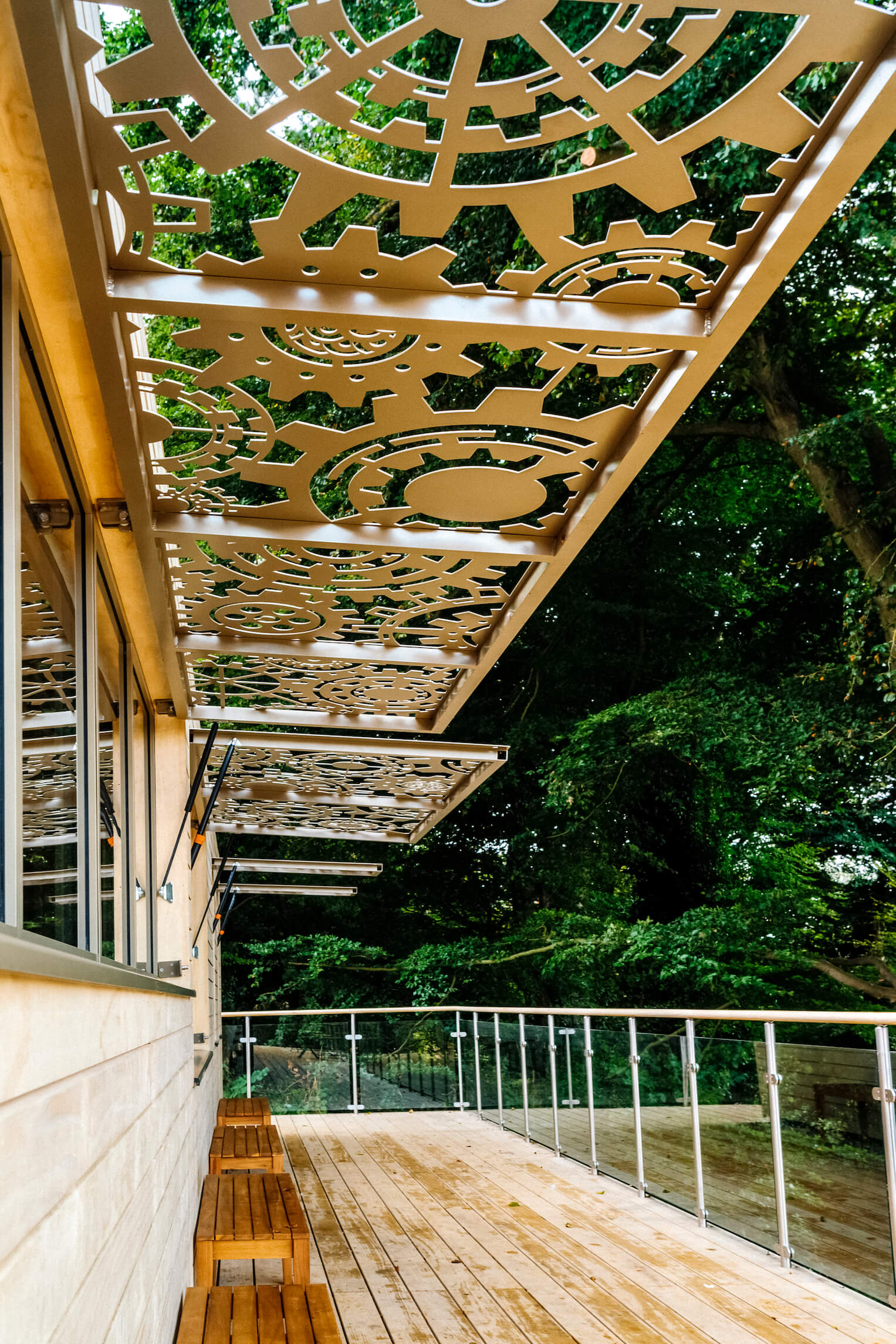 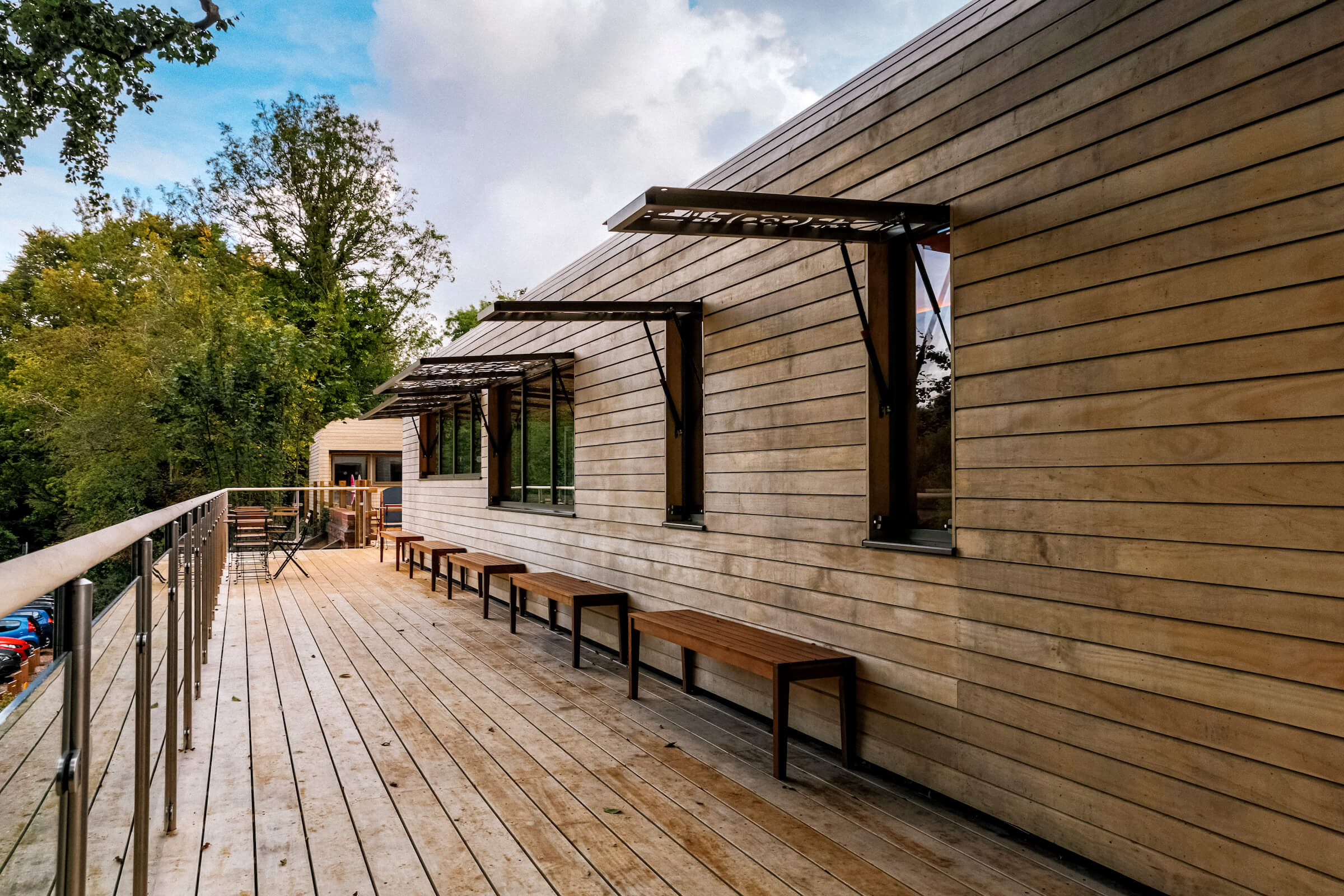 The building follows the form of a pair of railway carriages; their long single-storey shapes with gently arched roofs are linked by a lower roof and one of the pair is set further back from the other, as if they were passing on different tracks. 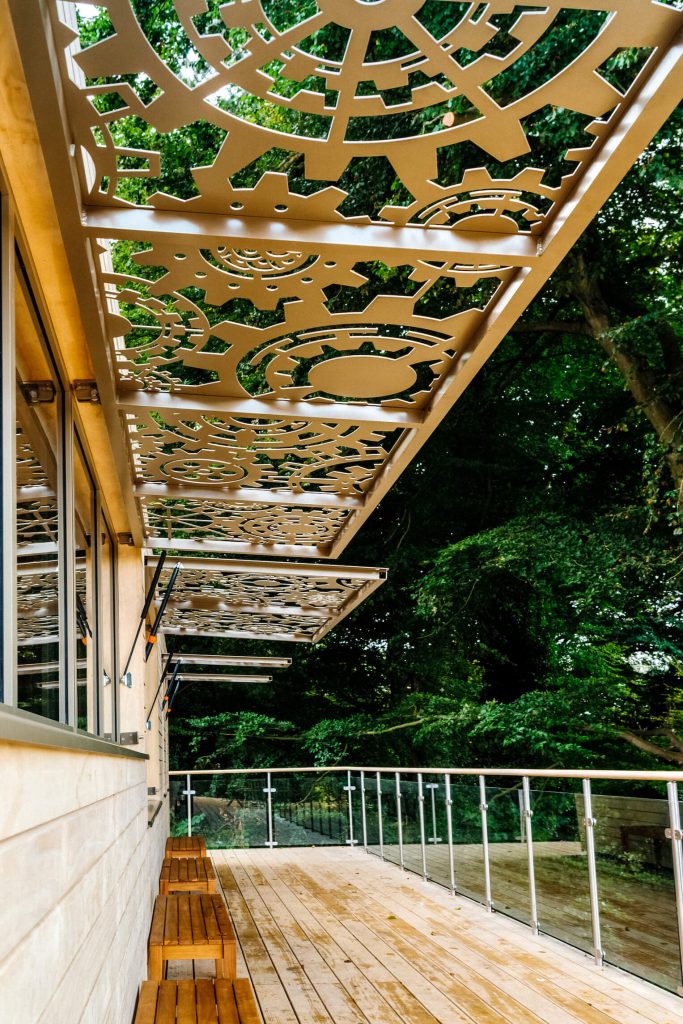 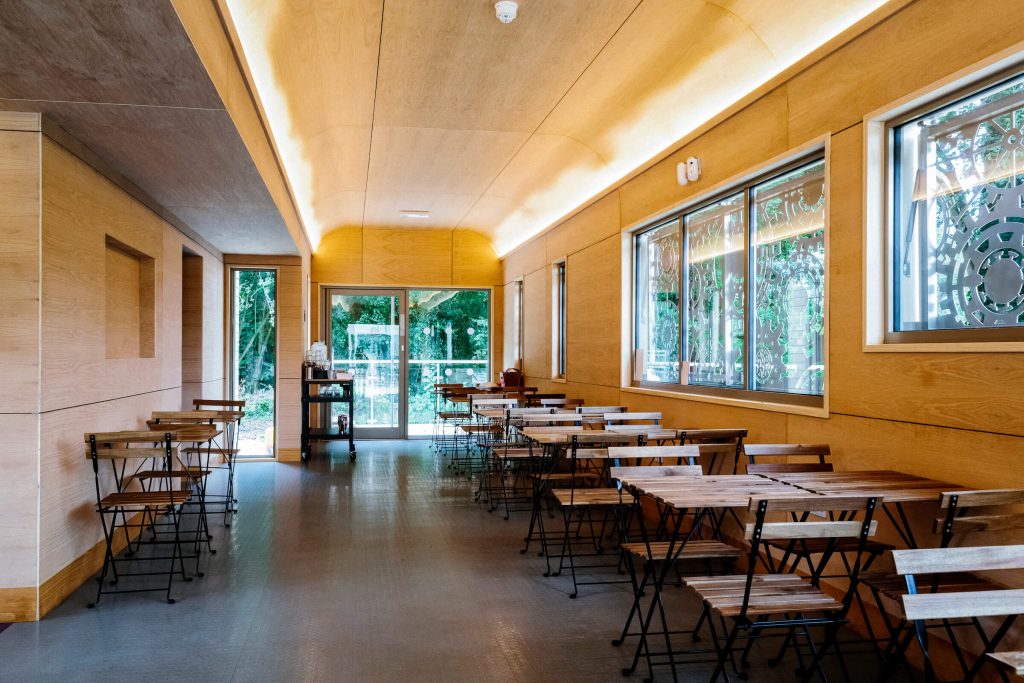 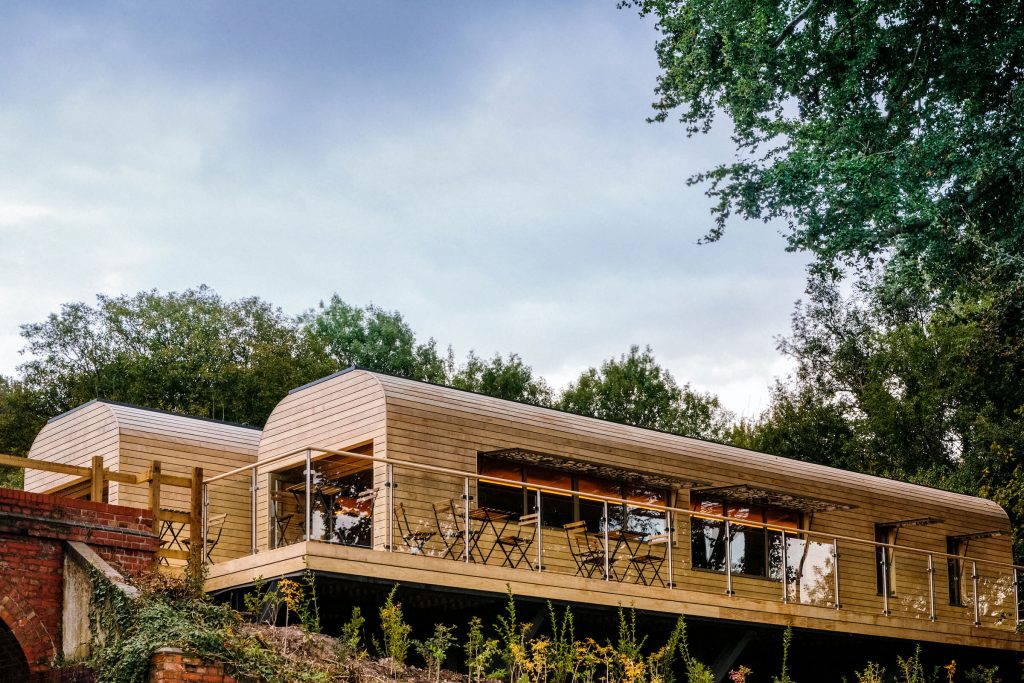 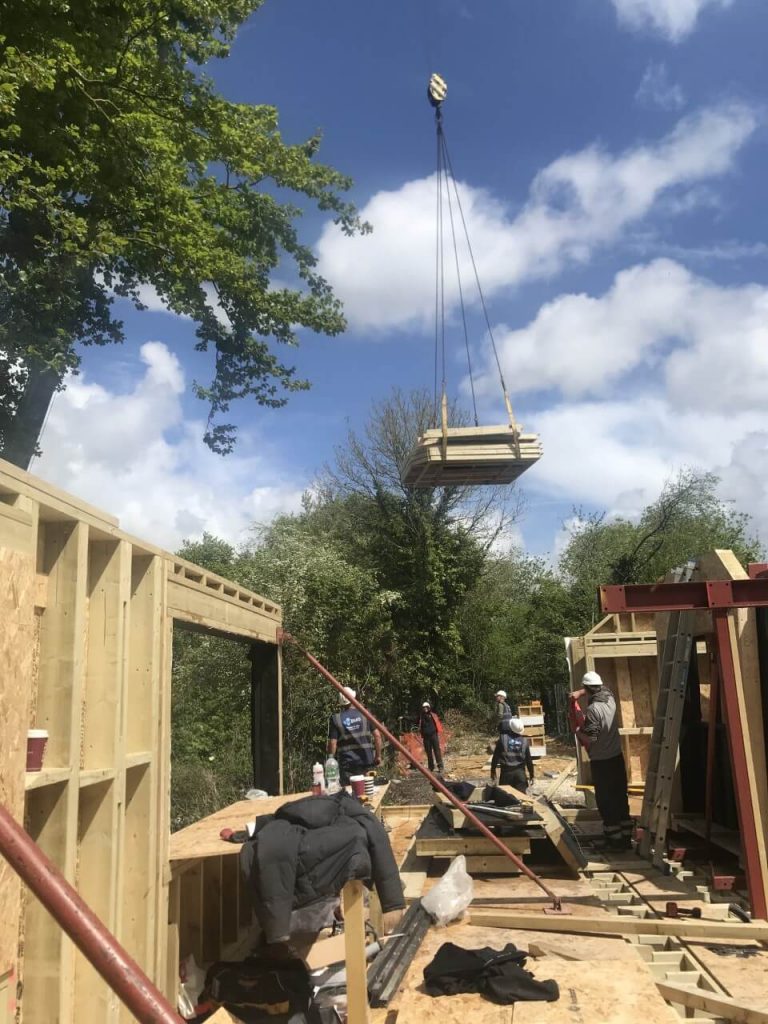 Six years ago a group of young students from Winchester had a brainwave – to design a community café and cycle workshop on a new cycle path which had just been established close to the town. The students were at a week long workshop run by SPUD, a Hampshire charity which aims to inspire young people and encourage an interest in architecture, urban design and public art. Together with architecture and environmental professionals who volunteered their help, in particular the local practice Architecture PLB, the group identified the site and put together a design. From this original concept it took four years of research, model-making, planning meetings and presentations before the project finally received planning permission, followed by a further two-year fundraising programme which raised more than £350,000 to build what is now the Handlebar café and workshop. The site of the new café was well chosen; it is just inside the boundary of the South Downs National Park and stands at the foot of a local beauty spot, St Catherine’s Hill, reached by a pleasant footpath from Winchester town centre with additional access from an adjacent car park. Just below the cafe the cycle path runs on what was once part of the Didcot to Southampton railway and leads to the magnificent 33-arch Hockley Viaduct, built in 1891. Having suffered a Beeching cut in 1960, both viaduct and track were restored as Viaduct Way, part of the Sustrans cycle route between Southampton and Reading. Inspired by the idea of trains crossing the viaduct, the group had originally considered re-using old railway carriages for the building. This proved impossible but the idea helped to define the final shape of the new café. The building follows the form of a pair of railway carriages; their long single-storey shapes with gently arched roofs are linked by a lower roof and one of the pair is set further back from the other, as if they were passing on different tracks. Inside, one carriage is dedicated to seating for café customers and is fitted with long narrow windows along the side wall; the other houses the kitchen, and servery, stores and toilets. Customers can also sit outside on a generous timber deck which extends around three sides of the café. A third similar but smaller carriage-like building on the same axis houses the cycle workshop and cycle hire; this is now operated by the local community interest company Bespoke Biking. Footpaths and steps lead up to the café and there is generous parking for bikes.