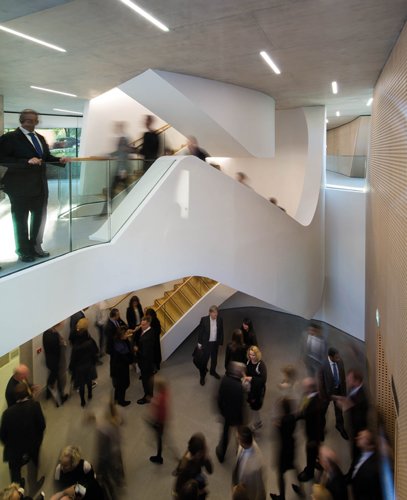 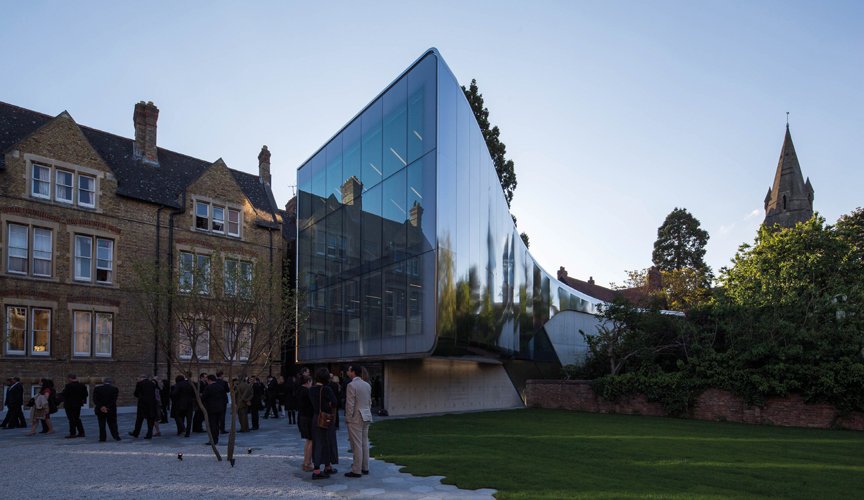 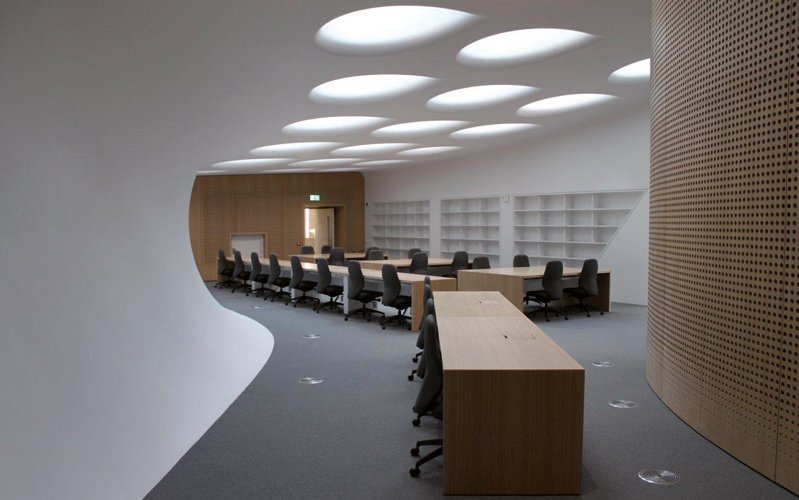 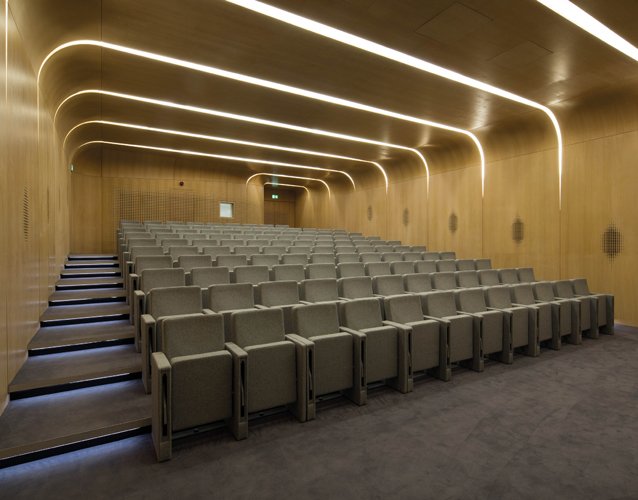 Zaha Hadid Architects has designed a new building for St Antony’s College, Oxford, a beautifully crafted structure with a sinuous, shimmering stainless steel façade, positioned with great care alongside its period neighbours. As Zaha Hadid explains: The project maintains the detached character of the college’s current buildings, allowing them to be read as separate elements, while introducing a contemporary building that conveys the past, present and future evolution of the college, university and city. The new building, now known as the Investcorp Building, slots into the very restricted site, respecting the existing period buildings and landscape, while its stainless-steel facade softly reflects natural light to echo the building’s context. St Antony’s College is one of the seven graduate colleges at Oxford and the Investcorp Building provides extra teaching space for its Middle East Centre in the form of a new lecture hall and a library with archive spaces and academic research areas, to cope with the dramatic recent increase in student numbers. The new building is strategically sited behind two large mid-Victorian houses on the Woodstock Road, both part of St Antony’s College. It creates a link between the two, curves on plan to avoid a century-old sequoia tree in the adjacent garden and rises in a shimmering double curve, terminating in a vertical glazed façade which faces the Hilda Besse Building, a 1970s concrete-clad Brutalist structure by HKPA. There are three storeys above ground and a basement containing a 117-seat lecture theatre and archive storage for photography and paper documents. From the basement rises a double-height space with a dramatic curved staircase leading to the ground floor, a multi-purpose gallery space that can also be used for informal meetings and study. The east wall of the gallery is a sinuous glazed curve overlooking the garden and the sequoia tree. Lifts, WC and kitchenette are concealed behind curved walls of perforated oak-veneered panels. The first and second floors are enclosed within a double-curved structure of glulam timber frames, clad with stainless steel. The first floor houses the library – storage, reading rooms and offices including 26 reading desks and 2,200 square metres of linear book storage. The much smaller second floor contains an archive reading room and office which looks out over the Hilda Besse building. These two floors are naturally lit by 25 skylights. The plaza at the building’s entrance is paved with hexagonal granite tiles, while a new lawn doubles as a green roof above the basement lecture theatre. The basement, ground floor and the first floor slab are of cast in-situ concrete. The lecture theatre in the basement is a column-free space, roofed with pre-cast concrete planks which span approximately 10 metres between retaining walls. A drainage system below the foundations ensures that the nearby sequoia tree and its extensive root system receive adequate moisture. On the ground floor the concrete wall and ceiling surfaces of the gallery are exposed and linear lighting slots were designed to sit within the exposed soffit of the first floor slab. The first floor slab itself is supported along the curved glazed wall of the gallery by a large V-shaped concrete column. The first and second floors are enclosed within the double-curved roof, comprising a series of 165 x 495mm braced glulam portals rising from the first floor slab. This fluid roof form, clad with stainless steel, covers the footprint of the building and the curve partially cantilevers over the external pavement. As the glulam portals are entirely concealed, the supplier, Constructional Timber, could connect the curved glulam members with face-bolted steel connection plates. A timber structure was chosen for several reasons: it cost less than a steel structure but in particular, the precise geometry of the roof was much easier to achieve by using timber – it allowed the detailing to be clear and simple while creating the precise curved shape of the roof deck. Timber also offered advantages over steel in its ability to withstand fire. By calculating the rate of charring, the glulam beams could be designed to resist fire without any need for cladding or extra protection. Structural engineers AKTII describe the design of the structure: An orthogonal pattern was adopted to support the stainless steel cladding as it was the most effective approach in terms of support, forming an array of straight frames that change dimensionally according to the building’s form. In the perpendicular direction to these main elements, horizontal elements provide stability and complete the structural system. The density of the structural pattern was determined by the skylights, leading to typical 1.8 metre spacing between frames which was also fine enough to allow the construction of a smooth curved surface. Most of the floor below the roof is a column-free space with essentially two lines of vertical support at the front and back of the building, inducing relatively long spans as well as requiring moment frame action for lateral stability, which is expressed in the roof’s cross section. At the front of the building, the frames are directly supported by the first floor slab edge, while at the back the support is provided by the same slab and cantilevers in other areas from the top of the west-facing wall. Stability in the longitudinal direction is guaranteed by diagonal bracing. The curved nature of the building required coordination of the structure with architecture and services. AKTII implemented BIM technology to accurately position and coordinate structural elements within the three-dimensional curved envelope.