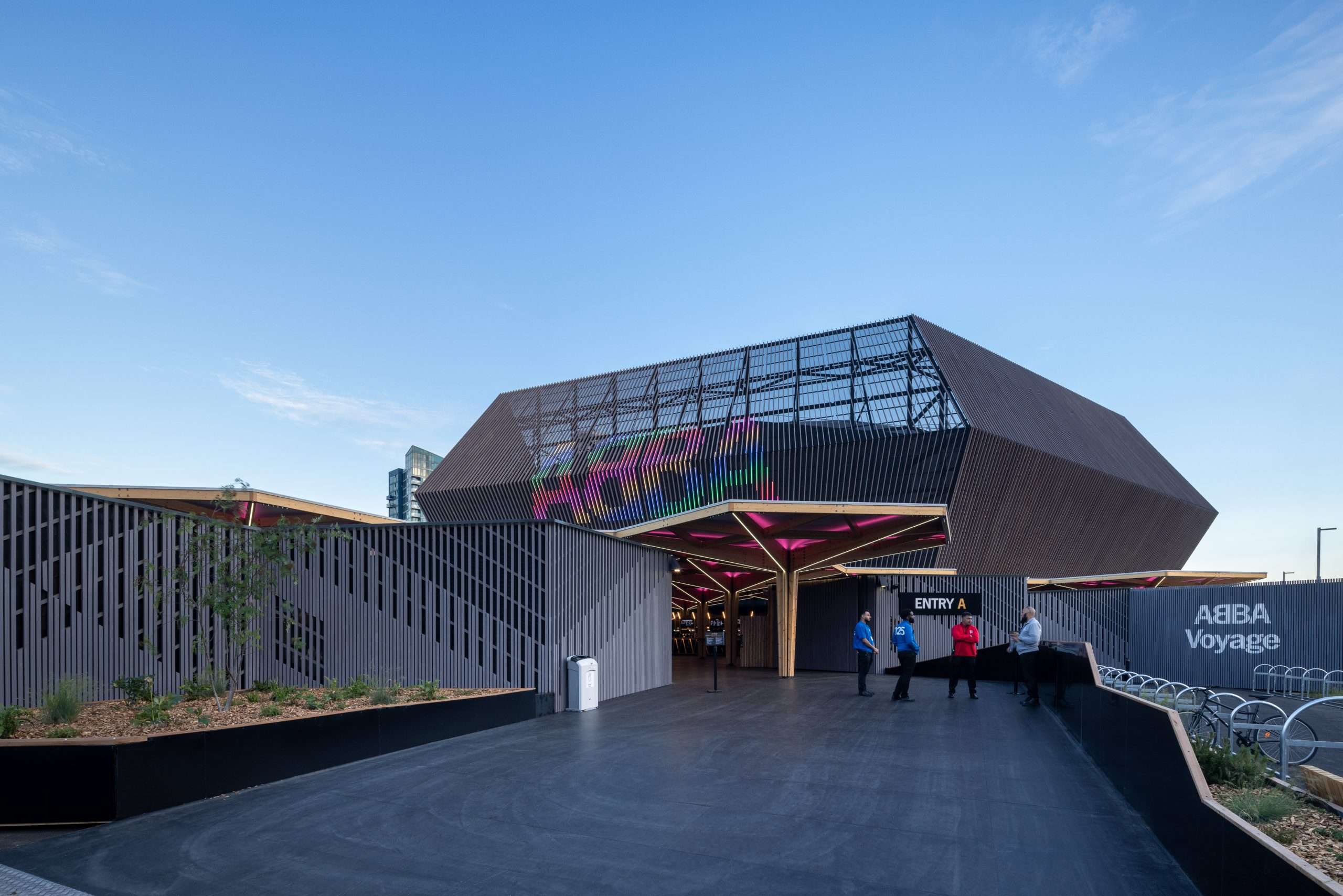 Timber has played a fundamental role in building the ABBA Arena – the venue purpose-built for the Swedish supergroup’s spectacular comeback concert.

The ABBA Arena, a demountable 3,000 capacity venue designed by Stufish Entertainment Architects, will be home to ABBA’s digital comeback concert until May 2023.

While the ‘avatar’ technology that creates 3D images of the band has attracted most of the headlines, the hybrid steel and engineered timber construction of the arena deserves equal praise. Oscar Emanuel, co-founder and managing director of specialist contractor Xylotek, says they worked hard to satisfy the planner’s stipulation that the building cause minimal disruption to the site in Stratford, east London. For its size the Arena also has a small carbon footprint which, thanks to Xylotek, got smaller as the design progressed. 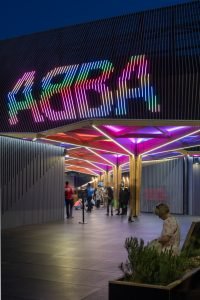 A trio of timber enthusiasts

The company was formed in 2018 by three partners with a common connection to timber-based building. Charley Brentnall was founder-director of Carpenter Oak & Woodland, Martin Self was with Arup and founding director of the Architectural Association Design + Make campus at Hooke Park, while Emanuel built and ran a timber construction business.

They all share an ambition to move timber building into more innovative areas, notably using engineered wood, and to promote the wider use of timber.

Emanuel explains: “We look for projects with something special. That can be complex geometry, complex engineering, or a site where you need very careful planning. More people are coming to us saying ‘can we do a timber option?’. We want to prove the benefits of timber, but also understand its risks and how to mitigate them for accurate cost analysis against other materials.”

The auditorium features more than 1,600 prefabricated spruce CLT panels – plus glulam structural components from Hasslacher of Austria. Xylotek joined the project after the appointment of main contractor ES Global.

“We prefer coming into the design and engineering process at an early stage,” says Emanuel. “It gives us a good idea of the design ambition and we can add our technical expertise. On the arena we worked in the 3D digital space with the contractors’ design team and did all the BIM coordination, working timber in with the other elements.”

The Arena is effectively two buildings in one. The 70m-diameter dome over the stage and auditorium and its support structure use a steel frame, while the four-storey auditorium is a free-standing building in its own right. The flooring, walls and seating banks all comprise structural timber. Engineered timber construction lends itself to a quick build, is relatively light and particularly suited to demountability, so no invasive foundations were needed. Instead the building rests on 300 jackpads, so the former carpark’s hardstanding will be unscathed when the Arena moves on.

Many of Xylotek’s projects are hybrid steel and timber, but where possible it aims to minimise the metal component – to reduce a building’s embodied carbon as the increased strength of modern engineered wood means less steel is needed.

Xylotek revised the original scheme for the Arena auditorium, increasing the volume of engineered wood from 630m3 to 900m3 and removing 140 tonnes of steel, halving the carbon footprint. The CLT and glulam structure uses hidden nut and bolt connections for ease of disassembly.

A glulam ledger approach was used with secondary members on every perpendicular connection bolted to both angles of the wall. All the timber sections and components are additionally designed with containerisation in mind for ease of transport.

Xylotek also worked to strict acoustic performance criteria. “The density of the CLT gives it inherently good acoustic properties that enhance the performance of the building,” says Emanuel. Xylotek also engineered and installed the auditorium’s 7,000m2 rainscreen. Using larch from PiveteauBois in France, pre-greyed to weather uniformly, it comprises 1,400 individual finger-jointed fins, a total of 15km in length, all fabricated in Xylotek’s Bristol workshop.

Fire safety measures included coating all the timber with surface spread of flame retardant. “We also worked with fire engineers on compartmentalisation and covered steel connections, as it’s the steel that fails first in a fire,” says Emanuel.

“We entered the Wood Awards because of the performance of the auditorium in the round; its light touch, demountability, end of life cycle and acoustics,” says Emanuel. “There’s a complexity to it which should also be celebrated.”

The building also demonstrates that misconceptions and caution about using wood in construction can be convincingly challenged. “We went into the project in a slightly disruptive way and said ‘we can do this in timber and get rid of a load of steel’,” said Emanuel. “We proposed things that weren’t on the table at the outset. There’s perhaps a lesson for the timber sector to do this more.”

© Martin Phelps | Construction of the Auditorium.