This paper summarises the studies carried out by the authors to understand the in-plane behaviour under monotonic and cyclic loads of CLT panels mounted using angle rackets and holddown anchors. The authors argue that since it is these connectors that are resisting the horizontal loads, either as shear transfer or tension created by the up-lift, the behaviour of the entire structure is influenced by the strength and stiffness of these metal elements.

The conclusion is that the shear movement of CLT panels is negligible, but depending on the test type, all the panels showed failures within the angle-brackets or the hold-down anchors. It is also reported that even when the horizontal load level was very low, the wall up-lift occurred, increasing with increased horizontal loads. The study then goes on to clarify the findings in terms of the angle-bracket and hold-down anchor types used. Several numerical models have also been analysed to understand the panel behaviour under monotonic loads and the results are explained. In summary, the paper concludes that the global stiffness of the walls were heavily influenced by the hold-down anchor behaviour.

The Wooden Annex is a single-storey, fully timber extension to a 1950s end-of-terrace house in South London. The addition of the annex accompanied a complete refurbishment of the existing house, creating increased and improved open living space for the homeowners. 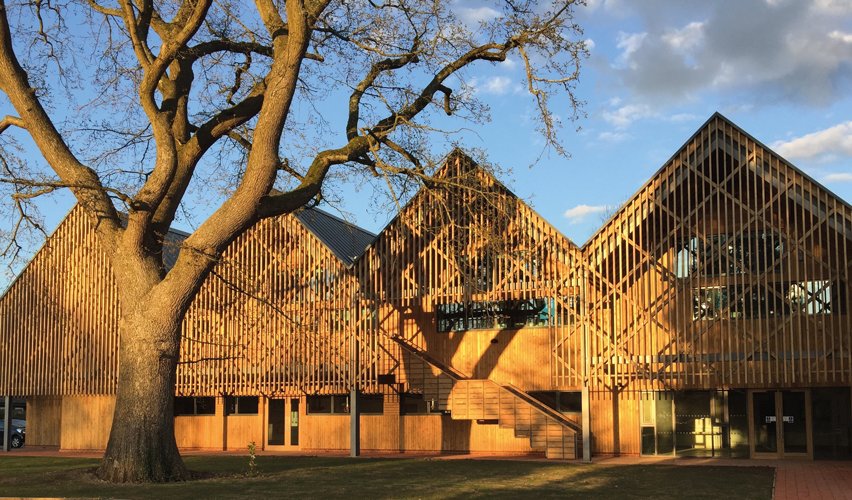 The new Art and Design Building by architect Feilden Clegg Bradley Studios is designed to be the creative hub of the school and a physical embodiment of its values and ethos.