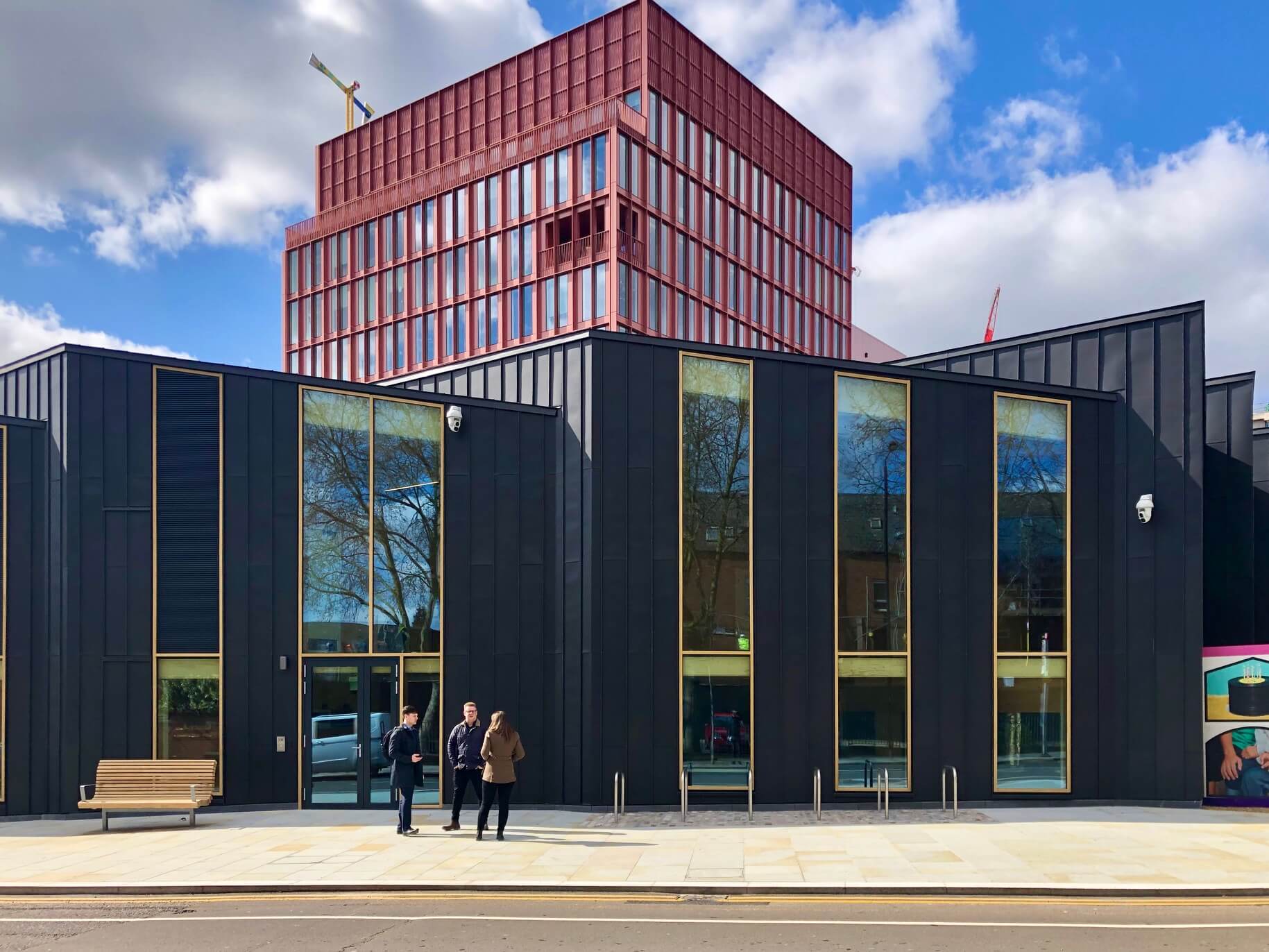 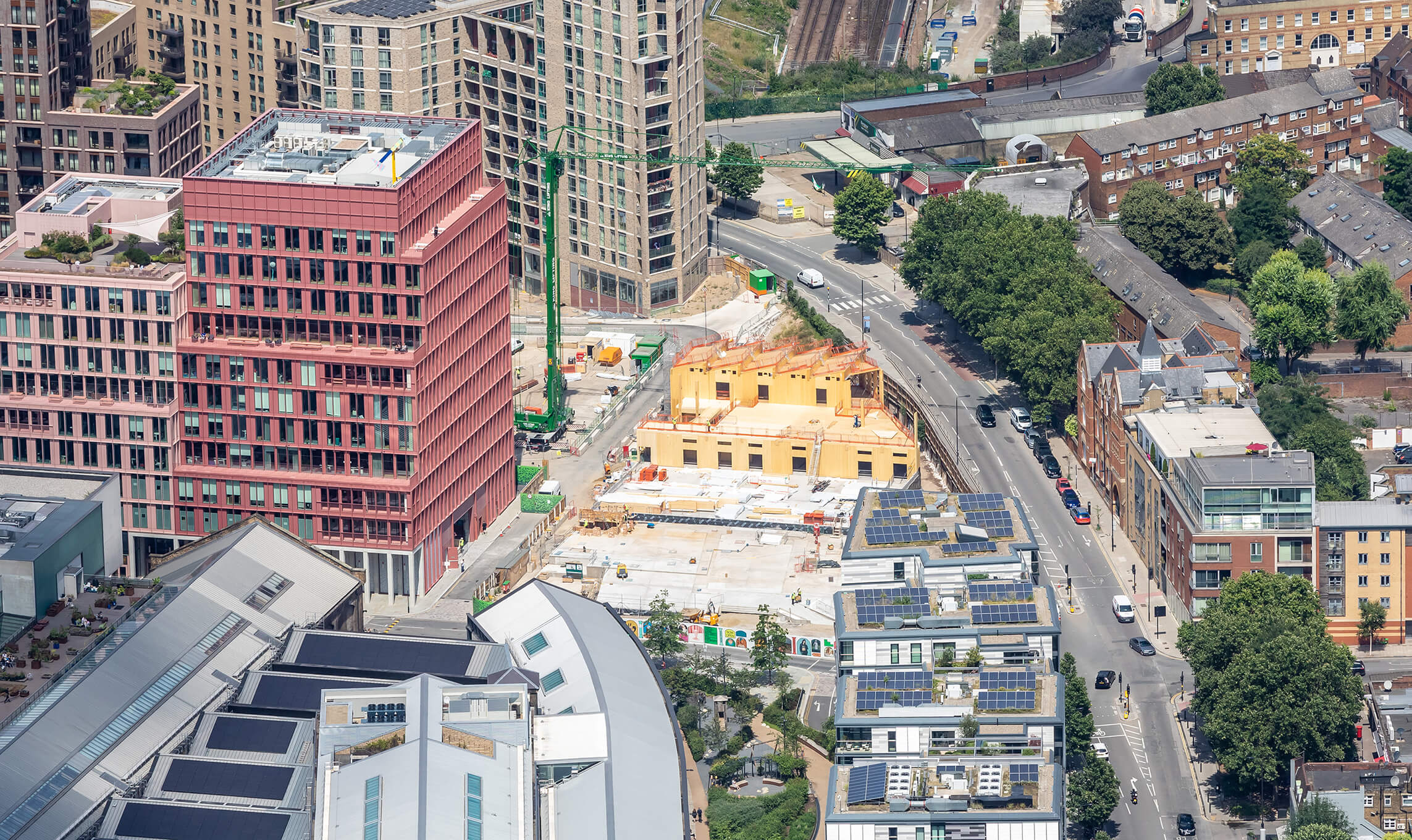 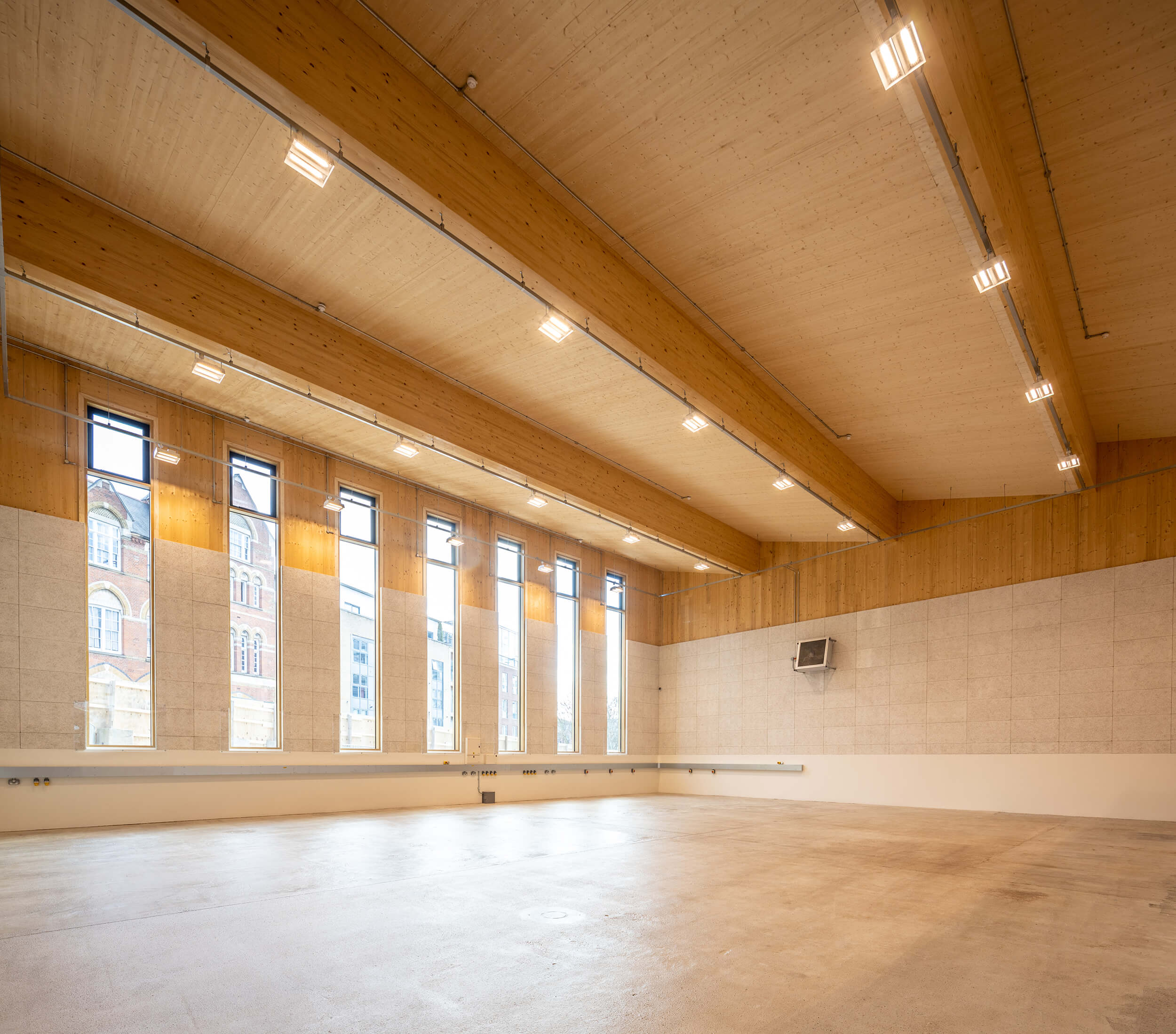 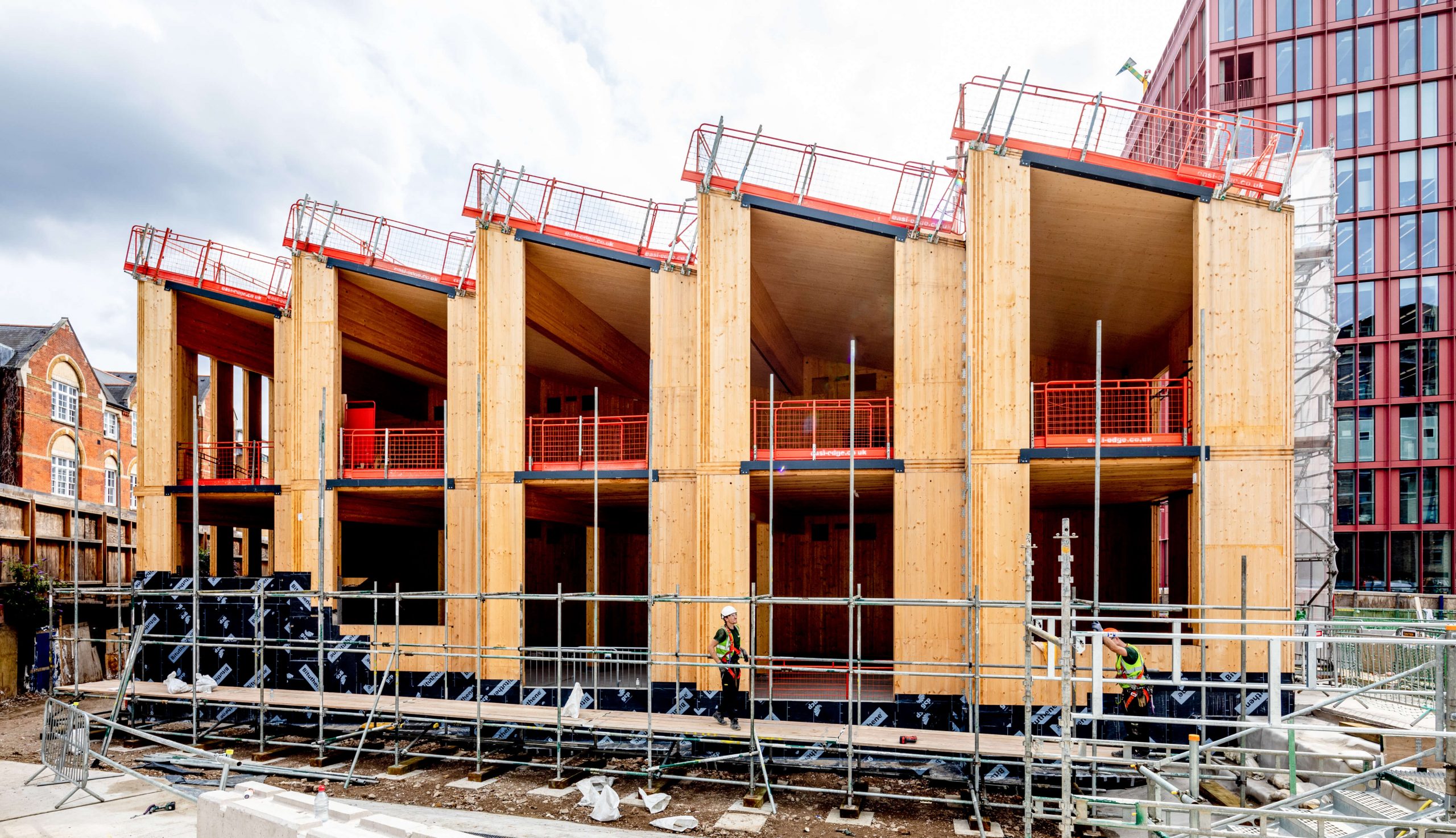 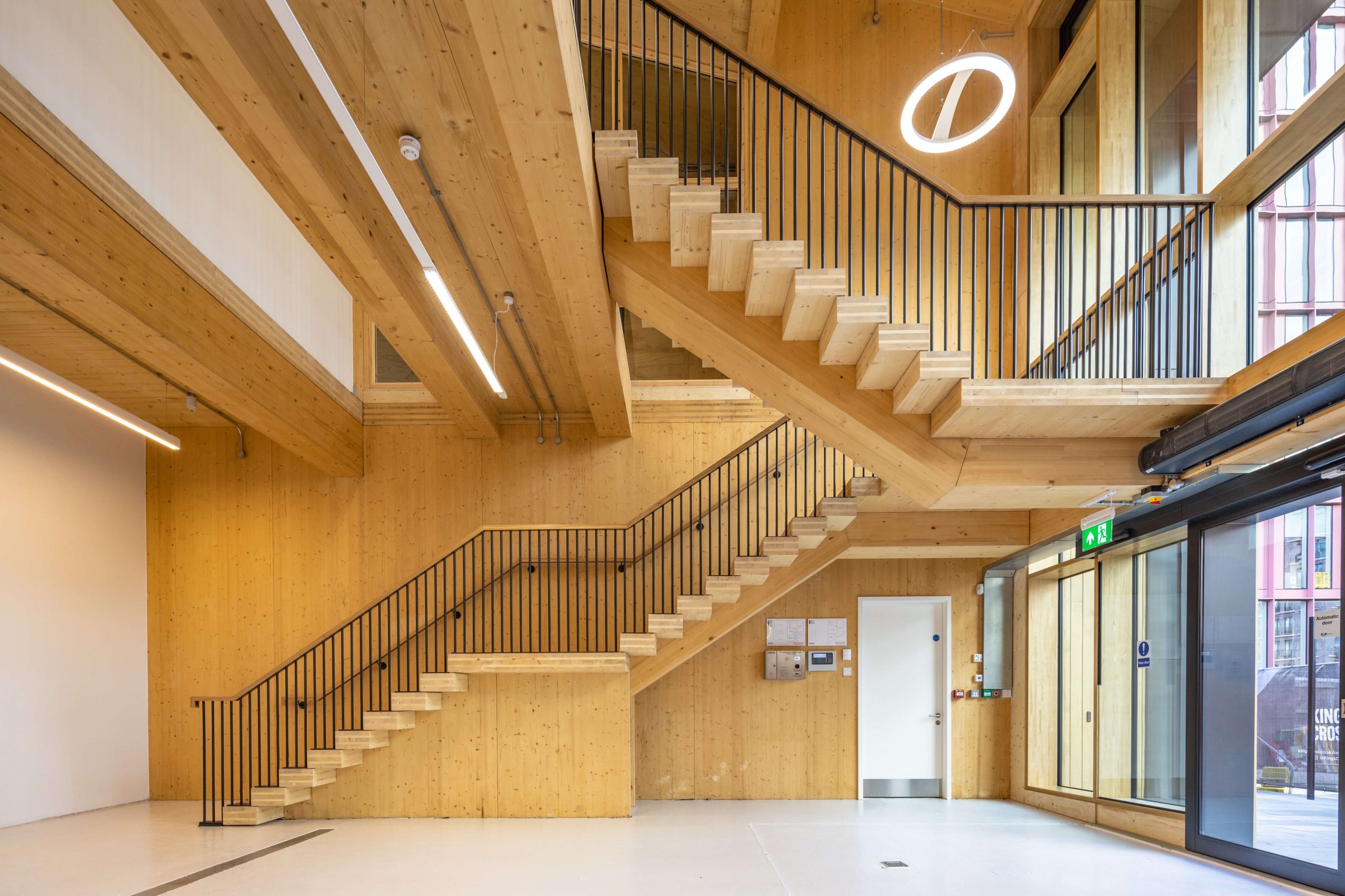 The building stands alongside York Way and is distinguished by a dramatic saw-toothed roofline inspired by the nearby West Handyside Canopy, a huge Victorian roof canopy which is now a thriving events space. 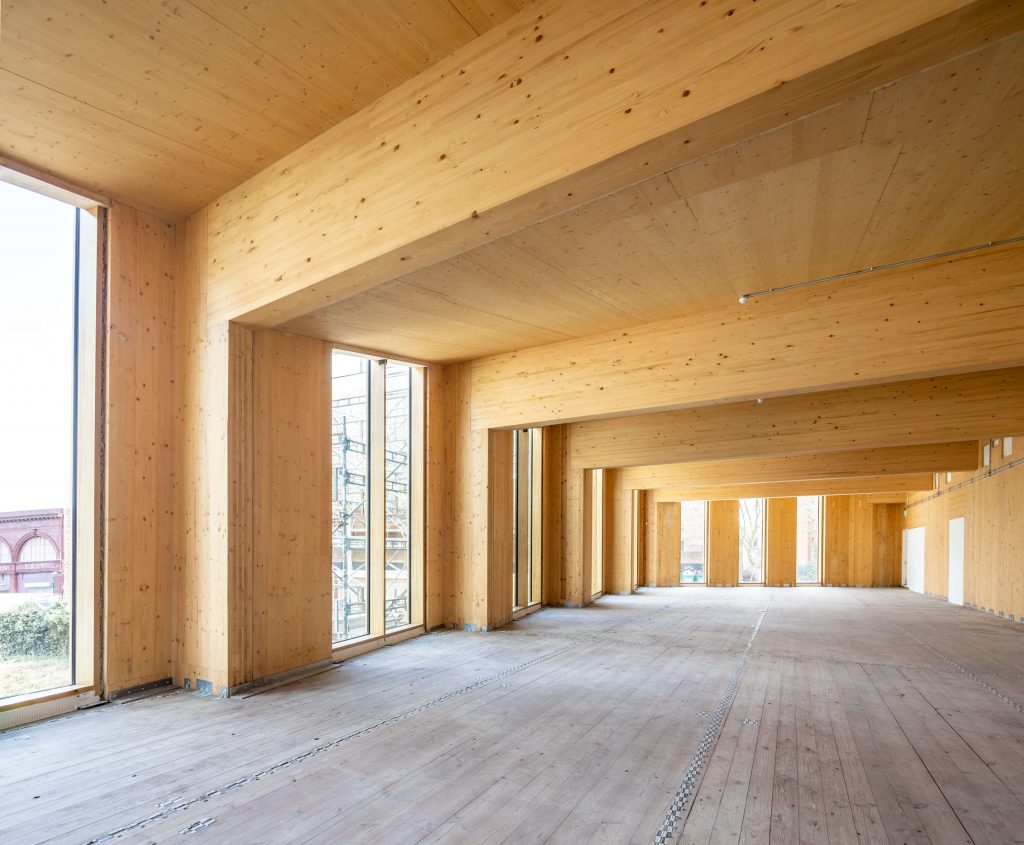 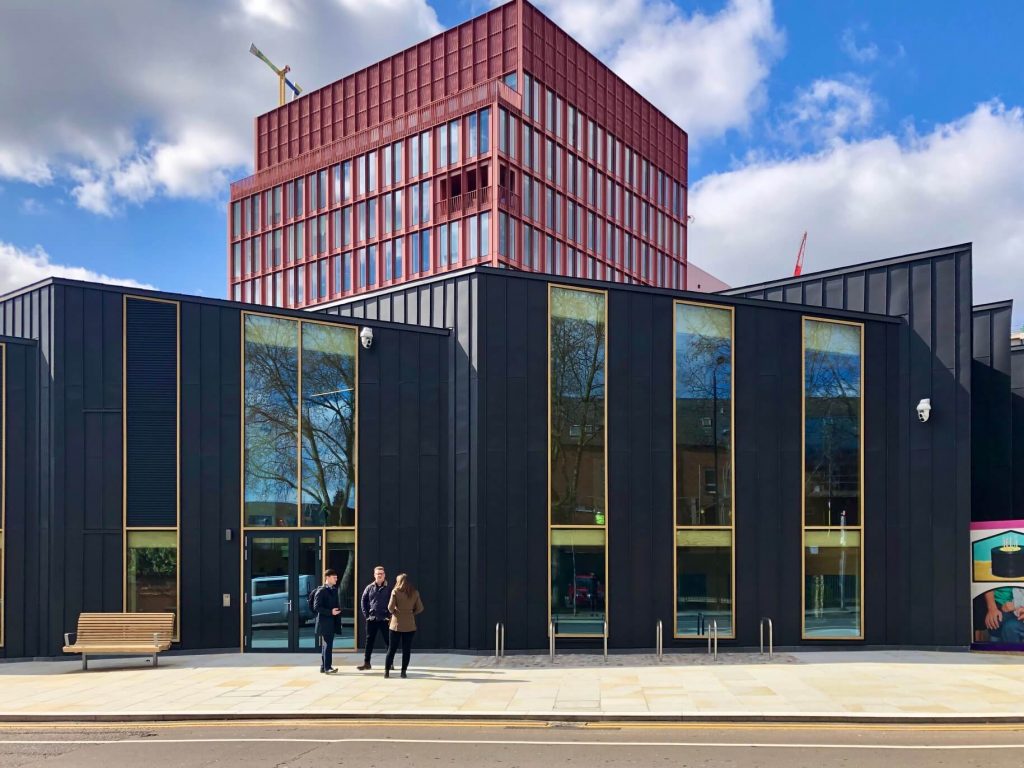 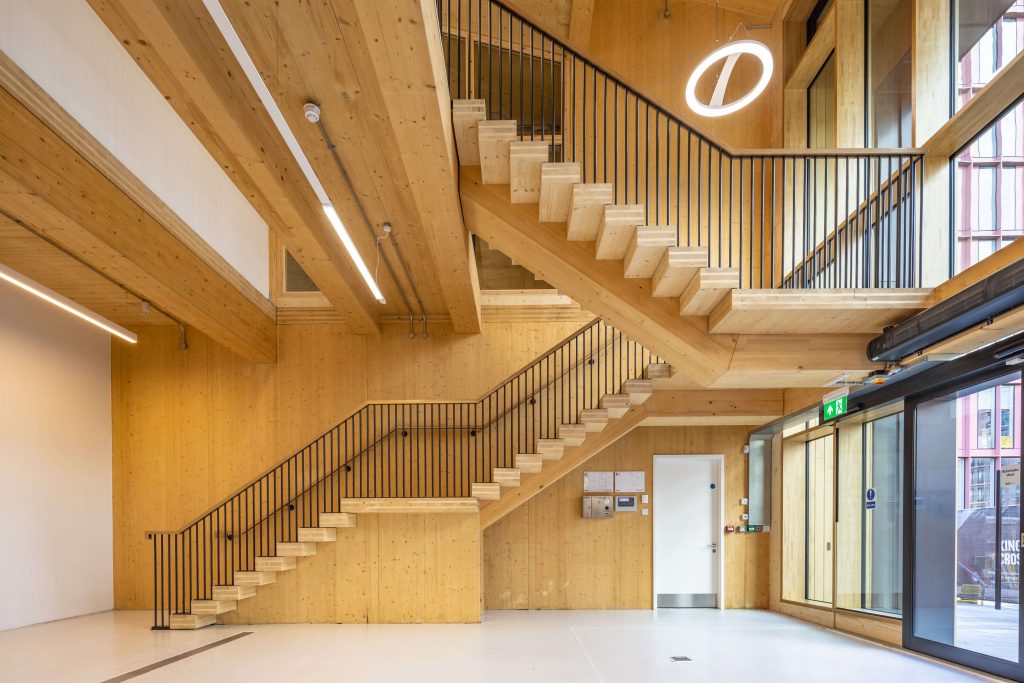 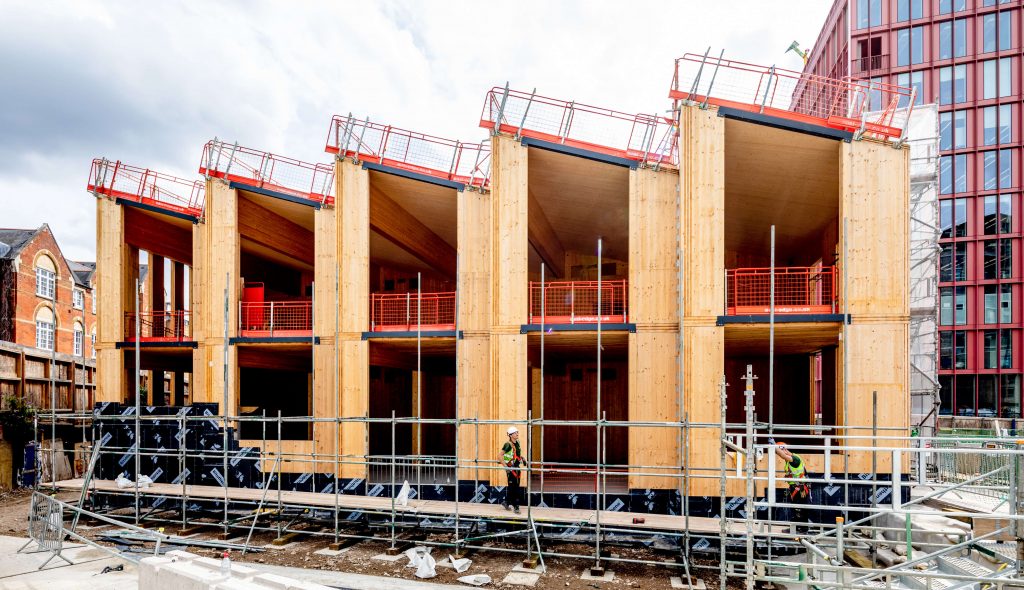 In the last ten years King’s Cross – the 27 hectare neighbourhood to the north of the railway station – has been transformed to create a new part of the city, with new businesses, restaurants and a lively cultural scene.

Once the site was an industrial hub with a huge gasworks, 19th century warehouses and railway goods yards for coal, grain and potatoes, encircled by the Regent’s Canal. Today these industrial buildings have been restored and repurposed; the magnificent brick and cast iron arches of Coal Drops Yard, for instance, are now filled with shops, bars and restaurants. Linking them are public spaces, a mix of parks, streets, squares and gardens with Granary Square at the heart of the development. More than 20,000 people now work in the area for companies including Google, Havas, ArtFund and Camden Council.

To serve residents of this new community, local office workers and visitors, the client commissioned the architect Bennetts Associates to design a community sports hall. It has an all-timber structure, chosen for its ability to create large spaces which would adapt to future use together with a warm and welcoming interior environment. Timber also fulfilled the brief to achieve a ‘near zero’ target of embodied carbon. But the other key reason for its use was the unique and challenging difficulty of the site; three railway tunnels known as the Gasworks Tunnels and built between 1849 and 1892, run only three metres below it. A lightweight structure was essential and timber – lower in density compared to other traditional building materials such as steel, reinforced concrete or masonry – was the clear choice.

Initially the building will take on another role, hosting the King’s Cross Construction Skills Centre until its own permanent location opens in Euston. The centre aims to help local people to gain employment in the construction industry either by becoming part of the development workforce or through training, advice, apprenticeships and job opportunities. Ultimately the building will become a sports hall operated by the London Borough of Camden. In this new role it will provide a twostorey health and fitness suite and an indoor sports hall designed to meet Sport England standards, which can be used either as four badminton courts, a basketball court and a volleyball court or a five-a-side football pitch.

The building stands alongside York Way and is distinguished by a dramatic saw-toothed roofline inspired by the nearby West Handyside Canopy, a huge Victorian roof canopy which is now a thriving events space. The façades are clad with dark grey patinated zinc; in contrast, once inside the glazed main entrance lobby, the warm and tactile surfaces of the exposed timber structure are revealed. The two principal interior spaces, sports hall and two-storey fitness suite, are arranged on each side of the entrance lobby which is backed by two levels of toilets and changing rooms. A glulam and CLT dog-leg staircase gives access to the upper floor and to viewing balconies. They overlook the sports hall, a 36.5 by 20.4 metre space which rises more than 7.6 metres to the exposed saw-toothed timber roof. The orientation of the building was determined by the position of the railway tunnels which run north-south directly below the site. The substructure is a bespoke mix concrete slab with strip foundation footings which span directly over the tunnels at right angles to them to prevent concentrated loads. The structure consists of a series of cross-laminated timber (CLT) soldier walls and slabs paired with glulam columns and beams. Francesco Ferrari, associate structural engineer at Arup, explains:

‘The linear nature of the CLT walls enables the redistribution of the gravity loadings by spreading the mass of the building uniformly. This, combined with the lower density of timber, provided the perfect solution to control displacements and stresses induced into the tunnels located beneath the new sports hall.’

Diagrammatic sketches by Arup demonstrating lateral stability are shown on Page 5. The CLT walls act as vertical cantilevers, with tension and shear connectors at first and ground floor levels. Wind load is distributed to the walls via the saw tooth roof members which act as deep beams.