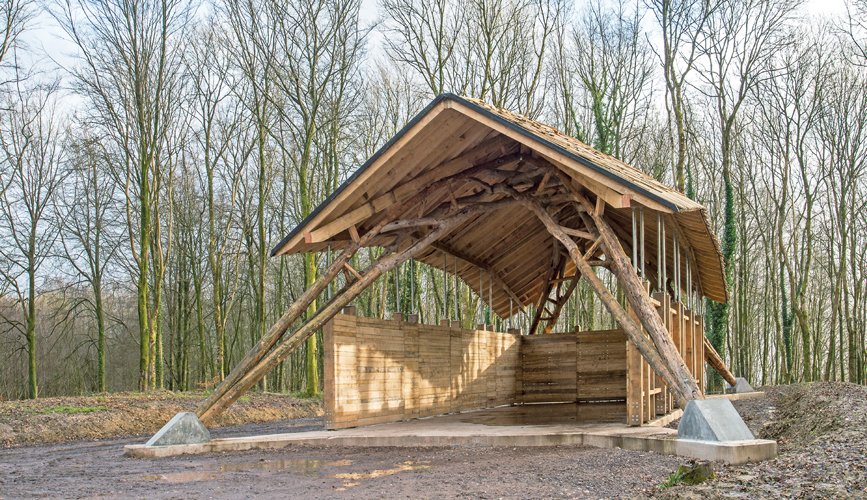 Most timber used in buildings today is machined, glued and fabricated, creatingstandard products from what was a very
non-standard element, a tree. 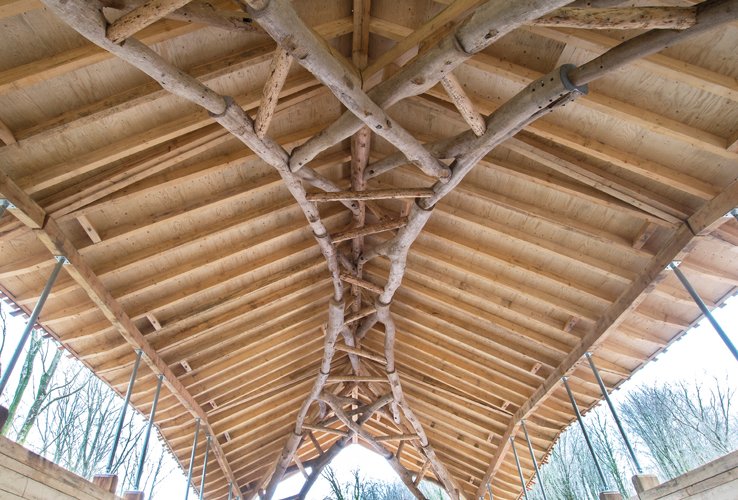 Most timber used in buildings today is machined, glued and fabricated, creating standard products from what was a very non-standard element, a tree. Yet trees have an inherent, natural strength and geometry; the branching forks of a standing tree show remarkable natural strength and material efficiency, able to carry out significant cantilevers with minimal material. A new building at the Architectural Association’s campus at Hooke Park shows how, by using sophisticated digital tools, the inherent structural qualities of natural tree forks can be used to create a large and dramatic structure. Traditionally, the natural curves and forks of trees were valued and used, particularly for fabricating timber boat hulls in the 17th and 18th century. In the past, boat builders went into the woods armed with a set of templates to find the specific tree forms they needed. Forks and other curved timbers were valued and selected for their shape and also for their grain, and by aligning the grains of branched members which had grown in response to specific loads and integrating these into their designs, boat builders were able to construct stronger vessels. Today, rather than finding forms to fit a predetermined design, the Design + Make team at Hooke Park developed digital tools to create a structure which is derived from the specific character of each component. Wood Chip Barn, the new building at Hooke Park, provides 400 cubic metres of storage of biofuel for a recently installed biomass boiler which allows the campus to be sustainably heated using its own timber from the 350-acre park. The Barn’s primary timber structure spans 25 metres from front to back and 10 metres from side to side, rising to 8.5 metres at its zenith. The arched structure is covered with a series of timber cassettes consisting of rafters, sheathing, EPDM and cedar cladding. The cassettes are supported at the eaves by a series of delicate steel/timber columns running along the walls; they are clad at low level with horizontal timber planks, and at the rear with a reinforced push wall. The Barn was built by students of the Architectural Association’s Design & Make Master’s course as part of the annual programme at the school’s woodland campus in Hooke Park, which engages with design through prototyping and construction of experimental buildings. It joins other innovative buildings on the site, including the Big Shed, a 500 square metre workshop/ shelter, (described in a TRADA Case Study in July 2013), which was used by the students to assemble large components of the new building. The student team at Hooke Park took a photographic survey of the tree fork geometries of 204 standing beech trees to establish which trees to cut down. From this survey 25 tree forks were harvested and a detailed 3-D scan was made of each fork to develop the final configuration of the truss. Traditional timber framing methods rely on projecting straight centrelines and axes onto irregular pieces of wood in order to work around each piece’s variations. For this project, the workflow – from standing tree to standing building – was organised to a consistent system of geometric referencing (both physically and digitally) to ensure that the 25 tree forks were precisely located and positioned. Three holes were drilled into each tree fork to define a local origin point, an orientation axis and a plane analogous to a local construction plane in 3D-modelling software. These holes were picked up in the 3D-scan and incorporated in to the digital modelling processes; ultimately they were used to support the fork during milling. The team explored several ways in which the organic forms of tree forks could be organised into a structure. It soon became clear that the naturally forming tree fork joint acted as a rigid moment-resisting connection, a property more common to steel construction. To utilise this ability, the team developed an arched structure using a Vierendeel-style truss system with the forks connected directly to each other to form non-triangulated trusses. The structure consists of two planar-inclined arched Vierendeel trusses of which the lower chords are connected by lateral elements. The structure lands at four points, the front two slightly wider than the rear, each supported by an inverted tripod leg. Using the Grasshopper plug-in for Rhino, the team developed a complex procedure (with 56 separate variables) to establish how each tree fork could be best placed within the truss. The strategy that proved most successful was to assign the forks to locations sequentially and in particular to select the most complex truss placements first. From the optimisation script, a series of possible truss configurations were out-put, and geometries sent to the engineering team for analysis and comparative quantification of the structural performance. By automatically drawing these lines to layers based on local fork diameters, the performance of the truss could be accurately and swiftly evaluated by the engineers for a large number of configurations. One of these was selected and refined. The optimisation script then produced a model with all the geometry needed for the necessary digital fabrication information – 60 curves, 60 points, 60 radius circles, and 20 meshes.