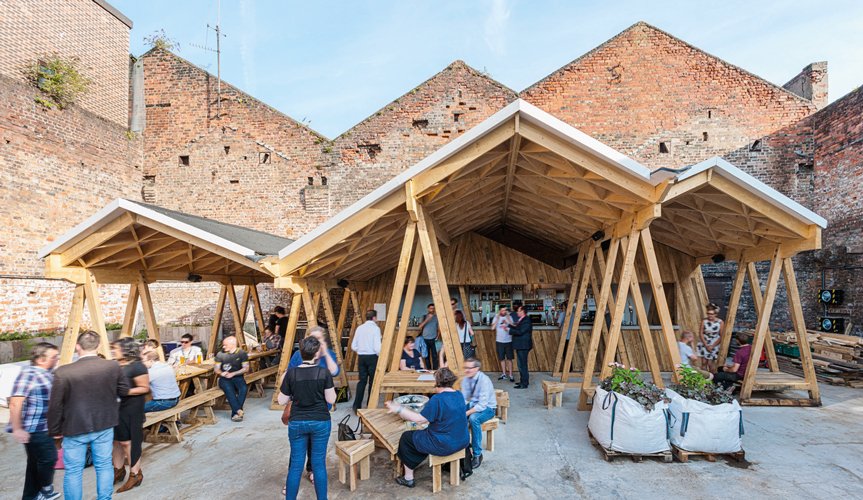 A dramatic timber canopy shelters the Constellations Bar, a new community space in The Baltic Triangle, between the Anglican cathedral and Queen’s Dock, a former industrial area in Liverpool which has evolved into a creative district. 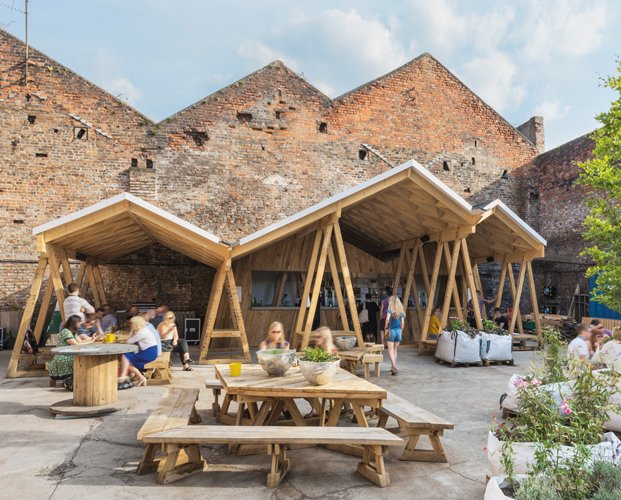 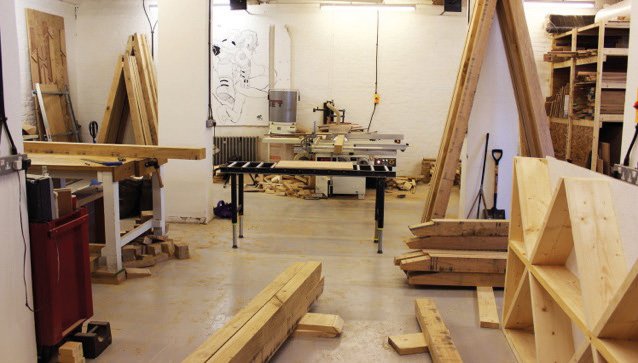 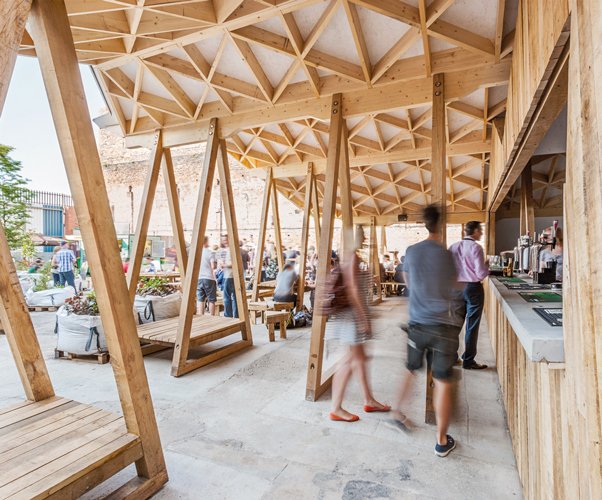 A dramatic timber canopy shelters the Constellations Bar, a new community space in The Baltic Triangle, between the Anglican cathedral and Queen’s Dock, a former industrial area in Liverpool which has evolved into a creative district. It’s a space which is much more than a bar; it is also an arts space, an outdoor venue for performances and cinema screenings, a site for a food truck and a community garden, all enclosed within a brick-lined courtyard, formerly a yard for industrial recycling. Both client and architect are local. The concept was the brainchild of Becky Pope, Nick Baskerville, and Paul Seiffert, a group whose backgrounds include community events organisation, marketing and craft beer brewing. The project was designed, built and erected by two brothers, Hugh and Howard Miller, who collaborate as H. Miller Bros. Hugh Miller is a designer and furniture maker who trained in architecture before setting up his own company, Hugh Miller Furniture. Howard Miller, an architect who previously worked in London, is director of Howard Miller Design. The two brothers formed H. Miller Bros, as they explain, ‘in order to have creative control over all aspects of a project, rekindling the Arts & Crafts ideal of gesantkunstwerk – a total work of art’. The brothers decided to move both their businesses to Liverpool early in 2013, attracted by the potential of the city’s magnificent buildings, many of which were unused, and the vibrant creative scene. They work from their design studio and furniture making workshop in a Victorian warehouse which is also in The Baltic Triangle. The design of the timber canopy takes its inspiration from the site, an enclosed brick courtyard created when a former warehouse burned down in the 1980s; the pitched roofs were destroyed and only the brick walls, including the gable walls, were left standing. Today the brick gables act as a backdrop to the design and their shape is reflected in the three pitched roof structures which form the canopy. The three roofs are identical in pitch but vary in length and height. The two larger roofs accommodate the bar while the third can be used to house a DJ booth. They are supported by a set of ten ‘quadrapods’ – paired A-frame supports made from green oak. As well as supporting the structure, each A-frame incorporates a bench seat or a table. Green oak furniture and planters made from one-tonne builders’ bags fill the courtyard around the bar. They can easily be moved to allow the space to be reconfigured to accommodate arts events, performance, cinema screenings or market.