House in a Garden 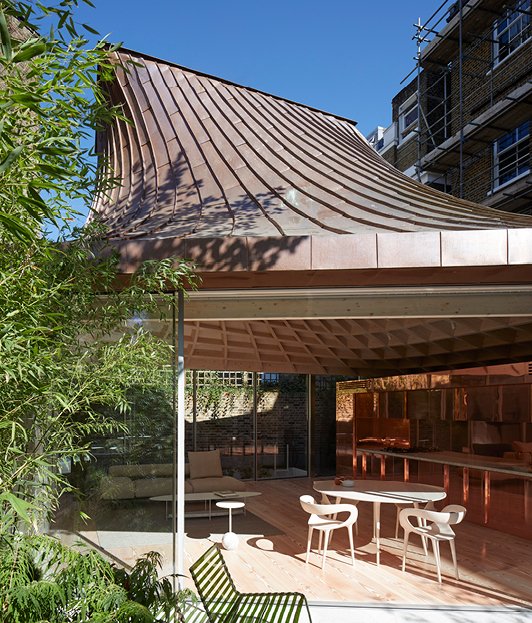 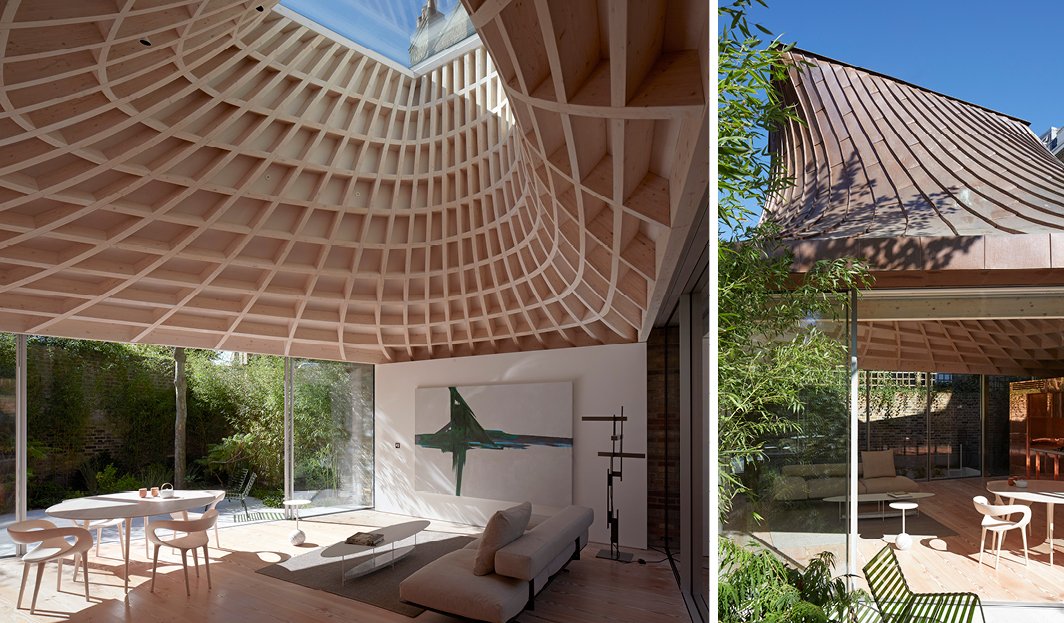 House in a Garden

Tucked behind two rows of tall 1840s Victorian villas in Notting Hill, London, is a modern single-storey house with a truly dramatic roof, its exposed timber frame rising in an elegant double curve to a glazed oculus. 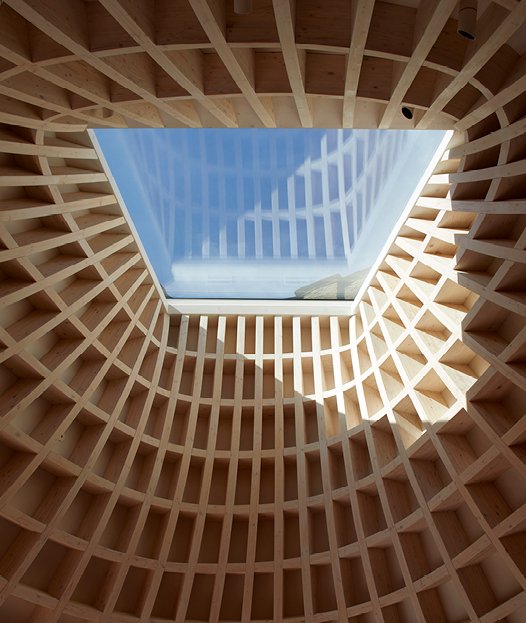 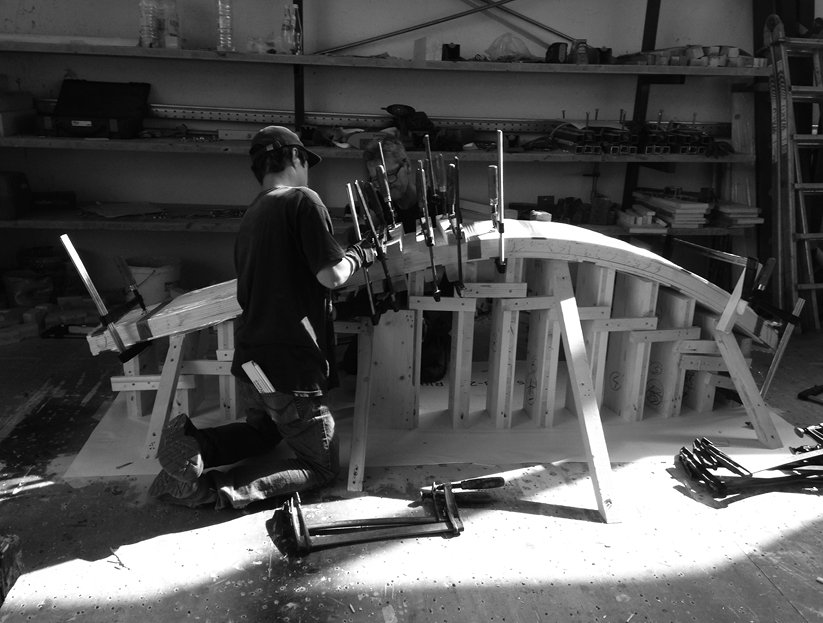 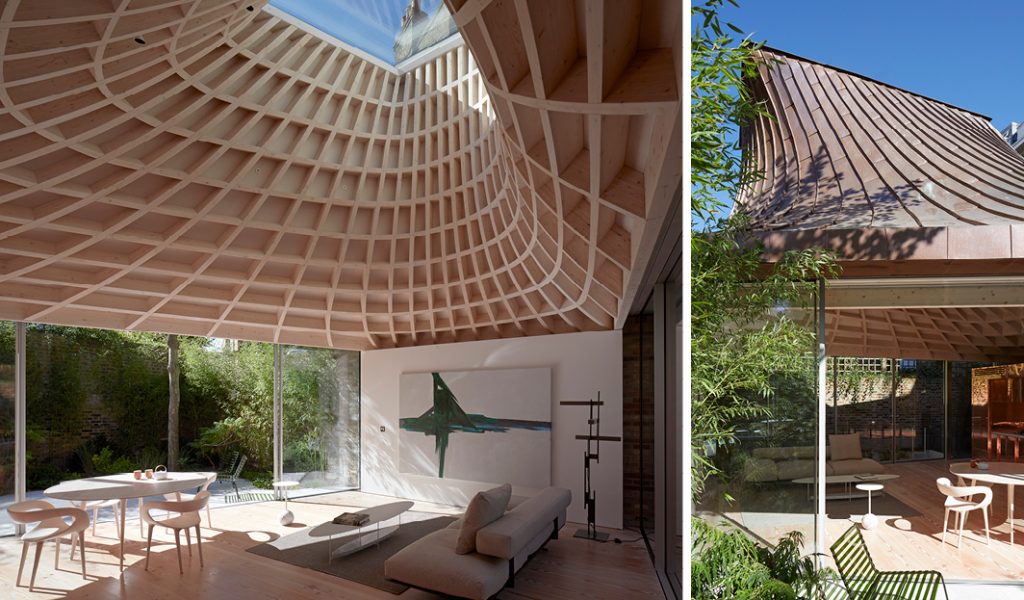 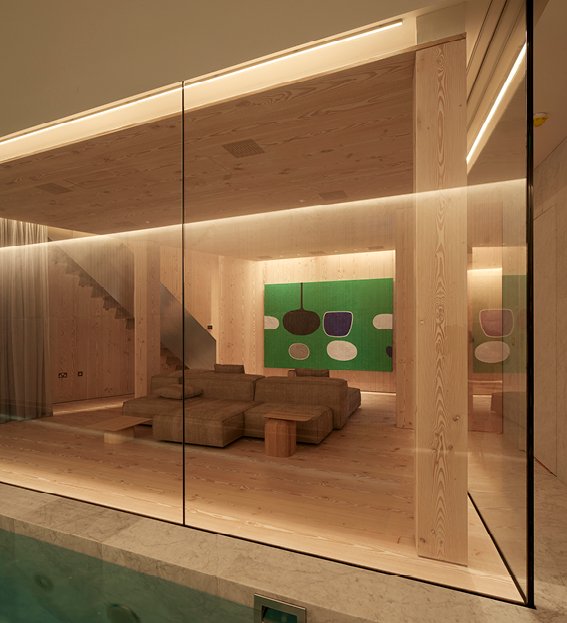 Tucked behind two rows of tall 1840s Victorian villas in Notting Hill, London, is a modern single-storey house with a truly dramatic roof, its exposed timber frame rising in an elegant double curve to a glazed oculus. The house stands on a site formerly occupied by a dilapidated bungalow, hidden away and reached only by a narrow passage between the villas. But the bungalow could be seen by the architect Gianni Botsford, from the window of his upper floor apartment and in 2010, intrigued by its possibilities for development, he bought it. It was a project which came with almost overwhelming constraints: severe constrictions on access and, in particular, the need to achieve privacy and light on a site overlooked on three sides by tall houses, while avoiding intrusion into the views and outlook of close neighbours. It meant that the new house had to be single storey, with extra accommodation achieved by creating two basement floors. To control and distribute daylight down to these two lower levels, they are flanked by light wells and gardens, which have been modelled using solar analysis tools. With such restricted access, the construction of the basement floors was especially complex; the piling to the perimeter was followed by the casting of the concrete floor slabs from the top downwards. The ground floor is an open plan pavilion, a living, dining and kitchen space, glazed on both sides and sheltered by the curved roof, its exposed timbers rising to the oculus, which is positioned to receive maximum sunlight throughout the day. From the living pavilion, a staircase descends to the basement containing a large master bedroom and bathroom with a smaller guest bedroom and bathroom, each lit by adjacent lightwells. The lower basement houses a ten metre swimming pool and a large flexible space which could be used as a gallery or cinema. Daylight from the lightwells is amplified by the use of light and reflecting surfaces such as copper and marble. Timber is used throughout the project. Botsford describes the concept as a diagram of timber -lined internal spaces (living rooms and bedrooms) adjacent to marble lined external spaces (wet areas, pools, and courtyards) juxtaposed with stainless steel and copper lined doors and cabinetry to provide an intensely rich experience of materials and atmospheres tempered by light. Externally, the roof is lined with copper sheet which in time will oxidise to green patina. The use of timber was a fundamental choice in the design; it forms the structure of the main roof and is used as linings to walls, floors and ceilings, as well as for a floating staircase, all of which are made of Douglas fir. As Botsford explains: We found that timber was not only the best material to build the roof, but also the best way to visually describe the complexity of the roof form itself while also creating a warm and comfortable domestic environment. All timber is sustainably resourced. The Douglas fir floor, wall and ceiling linings used throughout the project are PEFC-certified. The slender glulam elements of the roof structure are all of PEFC-certified European spruce glulam. The roof is a unique timber structure, both in its double-curvature geometry and its use of slender glulam elements. The roof contract was let to a German company, Züblin Timber, who subcontracted the timber structure to a timber workshop in the Dolomites in Italy. The roof shape was fabricated in eight sections and, when completed, craned into place over the surrounding five-storey buildings. The fit had to be perfect, Botsford says. We had to think through every inch of the house as a completed project from early on. The roof structure is covered with a double layer of 6mm birch plywood followed by a secondary glulam beam structure that forms the insulation and ventilation zone. This was then laid with 50 x 25mm timber boards, laid in opposing directions to avoid matching joints and to provide the substrate for the copper roof-sheet.